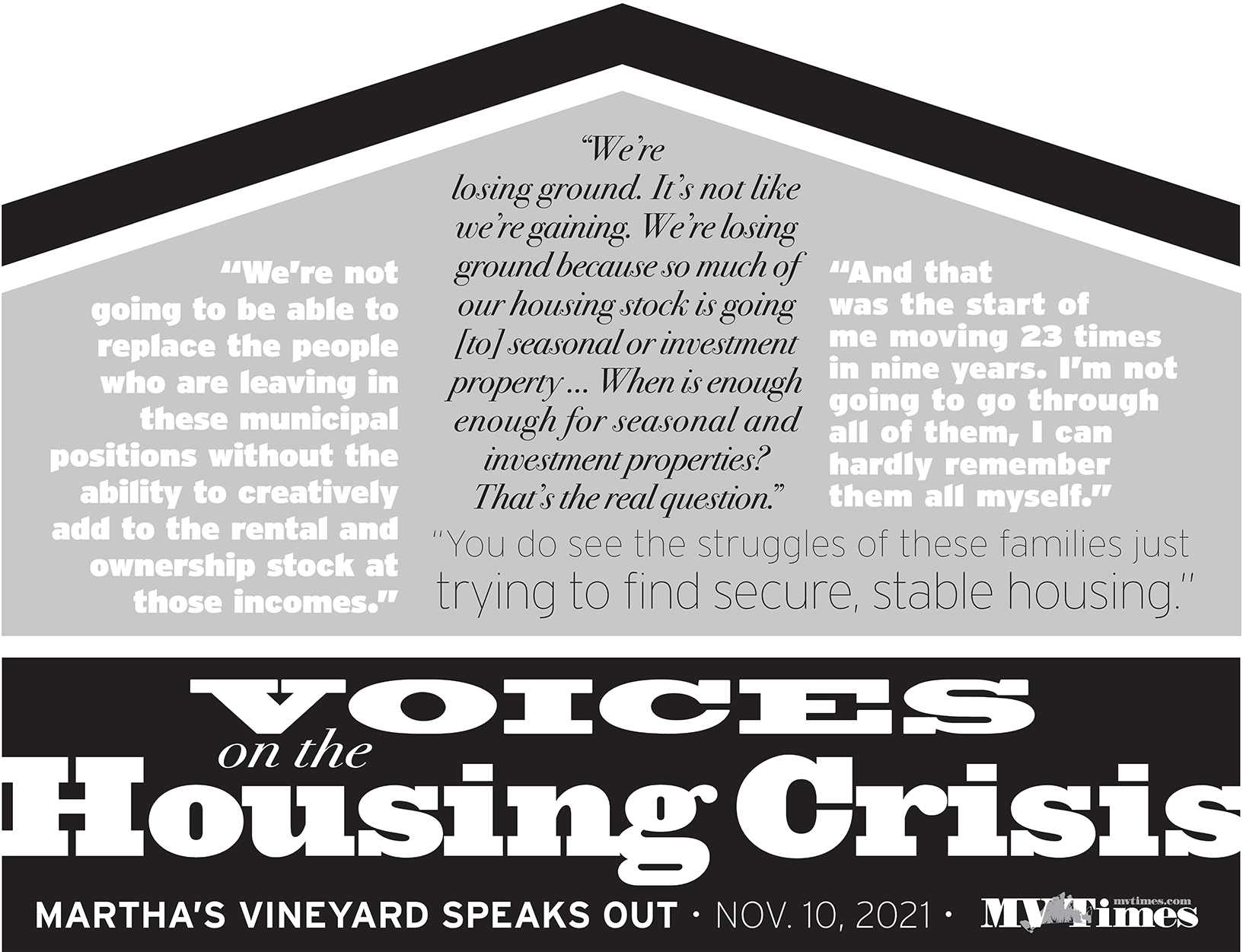 This project has been sponsored by Island Housing Trust, Rockland Trust, and the Coalition to Create the MV Housing Bank.

No one on Martha’s Vineyard is too far removed from the housing crisis — even those people who own their own homes or have leased apartments. It’s right up there with climate change as the biggest issue facing the Island.

At The Times, we’ve seen colleagues forced to make the tough decision. Unable to afford an increase in rent or find stable year-round housing, they’ve made the decision to leave. It’s heartbreaking to see people make decisions to move away — not because they’re ready, but because they’re forced out.

We’re not alone. The hospital has lost doctors and nurses. Schools have said goodbye to teachers. Police departments and fire departments have watched as officers and firefighters move to jobs off-Island.

Even a good-paying, professional career is no guarantee that you’ll be able to find an affordable place to live on the Island. A surge in sales has driven the median price of homes toward $1.2 million, putting home ownership even further out of reach.

When we were brainstorming ideas for our next “Voices” section, the topic that came up the most was housing. We seem to tell a housing story in nearly every edition of The Times, but we don’t often hear directly from those affected by the ongoing crisis.

In this issue, you’ll hear from people who have successfully found year-round, stable housing, such as Mathea Morais, who is so grateful for the opportunity to have won a housing lottery. For every person like Mathea who wins the lottery, there are three or four families who miss out.

So close to the dream.

You’ll also hear from a couple of military veterans — Rick Benard and Kevin MacDevette — who have chased that dream of living on the Island, only to be forced to move to places more affordable.

The crisis affects young people like Garri Saganenko and Ksenia Meleshko. They’ve both found rentals on the Island, but the journey to get there was paved with bad experiences, like spending thousands to share a room. They also can’t help but wonder, How long will the stable rental last?

Housing is also an ongoing issue for many seniors who own property on the Island and would like to stay, but there are few opportunities for downsizing, and zoning restricts the kind of housing that would allow them to sell their homes and stay in a smaller apartment on their property. Suzanne Lindsey, a senior, has been trying unsuccessfully to find a permanent place to live. Her journey has included moving 23 times in nine years.

You’ve heard it before. It’s not easy even for professionals — teachers, firefighters, police officers have all had difficulty finding housing. Sometimes, like Forest Filler of Chilmark, whom you will read about, you just have to get lucky.

There are lots of pans in the fire aimed at improving the situation. There is growing support for the Coalition to Create the Martha’s Vineyard Housing Bank, as well as the state legislation that would provide a 2 percent transfer fee on properties to help fund it. In a recent editorial, we reported that Island Housing Trust has a project in the works in each of the six Island towns — a first for the nonprofit developer. In this section, we have a roundtable of sorts with some of the key stakeholders in the pursuit of housing on the Island, and we look at how the resort community of Aspen has found a way to build housing for workers.

We appreciate the commitment made by publishers Peter and Barbara Oberfest to these sections.

We appreciate the contributions of our dedicated staff — Brian Dowd, Rich Saltzberg, Eunki Seonwoo, Lucas Thors, and Geoff Currier, as well as our production crew of Kris Rabasca, Dave Plath, and Nicole Jackson.

George Brennan - November 9, 2021 0
The housing situation on Martha’s Vineyard was already in crisis before the COVID-19 pandemic hit. The worldwide health crisis has made the situation with...

Brian Dowd - November 9, 2021 3
One of the models affordable housing advocates on the Island have looked at is the Aspen Pitkin County Housing Authority (APCHA), an affordable workforce-housing...

The Martha's Vineyard Times - November 9, 2021 5
My name is Suzanne Lindsay. I started modeling at 18 and then became a life coach, and I have a book out on Amazon....

The Martha's Vineyard Times - November 9, 2021 1
It is really great living here, but it’s not easy. I remember right when I moved here, I didn’t even really go off-Island for...

The Martha's Vineyard Times - November 9, 2021 0
Mathea Morais was interviewed by Eunki Seonwoo. I grew up in St. Louis, Missouri, but we summered here my whole life. We used to venture...

The Martha's Vineyard Times - November 9, 2021 0
I am a member of the Oak Bluffs affordable housing committee, where I am one of, across the Island, perhaps only a handful of...

The Martha's Vineyard Times - November 9, 2021 0
After serving as an artillery officer in the Marine Corps, Captain Kevin MacDevette moved to the Vineyard. Drawn to the Island’s oyster industry, and...

Rick Bernard — Forced to move away

The Martha's Vineyard Times - November 9, 2021 1
I was born and raised on the Island. I’m from Oak Bluffs, as my father was, and my grandfather. I grew up in Oak...

Forrest Filler — Getting out of the shuffle

The Martha’s Vineyard Times is grateful for the support of our sponsors and supporters, without whom projects like this would not be possible.

Island Housing Trust
“The need for more equitable and stable housing is a local, regional and national issue. Recently the realization that as a nation and a community we must do more to provide decent, affordable and dignified housing for our residents and their children is being widely discussed. Stable housing impacts health outcomes, educational success and job security and is directly linked to food scarcity. Having a home provides the foundation every person needs to grow and prosper. This reawakening has provided tremendous momentum for IHT’s Vision 2025 to create 150 more new ownership and rental homes by the end of 2025. Our Island is resilient but we have reached a tipping point. The lack of affordable year-round housing is eroding our community and we all must do everything possible to change the tide.”

Rockland Trust Bank
“Rockland Trust knows that by taking action and supporting our neighbors, we’re strengthening the same communities in which we live and work. Thank you to all of the contributors who made their voices heard and shared their stories about how the national housing crisis is impacting Martha’s Vineyard.”

Coalition to Create the MV Housing Bank
“Land conservation is a familiar concept and an important one. People conservation is equally vital. Help us save the Island community before it becomes extinct.”

Cape Cod 5
“Accessible year-round housing for all residents has long been a challenge on the Vineyard, and these last two years have exacerbated the issue to a crisis point. Cape Cod 5 recognizes the criticality of appropriate, affordable housing options for the residents of our region and is committed to being a community partner working towards a solution. Our community’s dedication to the responsible maintenance and creation of accessible housing is more crucial now than ever, and is necessary to provide the most basic needs of year-round Island residents while supporting a healthy and diverse workforce and economy. We at Cape Cod 5 use every resource available to us – as a business, financial institution, employer and member of the community – to help address the unique housing challenges we face on the Vineyard and in all the communities we serve.”

Feiner Real Estate
“Everything on MV is protected but the people. It’s time that we define our community by the people we see in it, not that houses that occupy it.”

South Mountain Company
“Our company’s commitment to this community is to help make it the best place possible for this generation and the next. Establishing a regional housing bank is one of the most important actions we can take.”

MV Mediation Program
“As we provide support for tenants and landlords to resolve conflicts, our staff and mediators are lifted by Maya Angelou’s words: The ache for home lives in all of us, the safe place where we can go…”