Last Saturday a fortunate few enjoyed an evening with three exceptional singer/songwriters, as Phil DaRosa was joined by fellow artists Meghan LaRoque and Erich Luening at the Union Chapel. The occasion was the release of a three-song EP disc by Mr. DaRosa, his second solo effort since he recorded the full length CD, Better Days, in 2007.

A staple of the Vineyard music scene, Mr. DaRosa was excited to play at the landmark octagonal church in Oak Bluffs. “I’ve been playing in bars this year,” he says. “It will be great to hear every note and they [the audience] can too. The intimacy factor is one of the elements.”

His full sound, polished voice, and expert guitar playing were certainly well suited to the wonderful acoustics of the Union Chapel. Music spilled out into the soft September evening, entertaining passersby as well as the handful of ticket holders inside.

WMVY’s Laurel Reddington introduced the three acts, commenting on their commonality by saying, “They all have this depth and sincerity.” Performing original songs, quite obviously from the heart, the trio of talented musicians packed a terrific emotional 1-2-3 punch and the evening was a fun informal event, spotlighting some of the Island’s best and brightest.

Ms. LaRoque opened up the show with four songs from her recently released CD Carry Me Home. Vocally, she manages to extract a lushness from her simple, unadorned style and her hesitant, deliberate delivery has a wonderful opiate effect on listeners. She was accompanied on electric guitar by Devin Edan McCormick, who performed one of his own compositions.

Eric Luening, who will be releasing a long overdue first CD next month, shared his soulful enthusiasm with the crowd. Among a handful of songs, he performed his touching “I Will Never Go Away” with Ms. LaRoque, displaying his characteristic clear bell of a voice on the chorus. Mr. Luening finished his set with a duet with Mr. DaRosa on the title track from his CD, a catchy pop tune called “Red Flags.”

The duet provided a nice segue into Mr. DaRosa’s hour-long set. Starting off by saying that he was excited to be playing, his performance bore that out. The eminently likable singer charmed the audience with an easygoing and unassuming manner that belies his huge talent. Mr. DaRosa played many of his most popular songs, a range that covered his many years as a writer and performer on his own and with a variety of Island-based bands.

Mr. DaRosa’s music is somewhat reminiscent of Dave Matthews. However, in place of gruffness, the Vineyard native has an appealing sweetness to his voice. Mr. DaRosa explained that his three new songs are a departure from his acoustic stylings and he is experimenting more with electronic mixes. Pinto Abrams on electric bass joined the singer for part of the set. The singer also noted that two of the three new songs are more playful and less serious than his previous material.

The show closed with Mr. DaRosa and Mr. Abrams playing the classic Bob Marley tune “Bend Down Low.” The irrepressible Mr. Luening joined in from the back of the room. He needed little encouragement from his longtime friend to take the stage, and the evening ended with two of the Island’s most distinct voices harmonizing wonderfully. 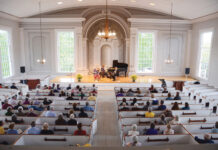