Elias Fhagen-Smith broke a 5-5 deadlock by batting in the winning run in the top of the sixth inning, capping a perfect day at the plate with three singles, two RBIs, two runs scored, and a steal.

Jonas Lukowitz was a home run shy of batting for the cycle, going 3-4 with a single, double, triple, two runs scored and a stolen base.

The Vineyarders climbed out of an early 2-0 hole with three runs in the third inning. Aidan Aliberti laced an RBI double to put MV in front 3-2.

Latin tied the score in the bottom half of the third but MV quickly regained the lead, adding one run in the fourth and fifth. Hunter Fox Jakusik doubled in James Sashin and Elias Fhagen-Smith scored on a wild pitch.

Latin fought back to tie the game 5-5 in the bottom of the fifth but Vineyard reliever Chris Mayhew got out of a bases-loaded jam, then pitched two innings of scoreless ball to earn the win.

Elias Fhagen-Smith got the start on the mound, giving up four hits and one earned run with five K’s and three walks in four innings of work.

The Vineyarders travel to Nantucket for a two game series on Monday and Tuesday, play in Boston against Madison Park on April 21, then host Bourne on Tuesday, April 25 at 3:15 pm. 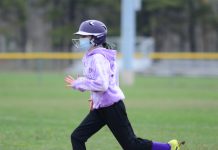