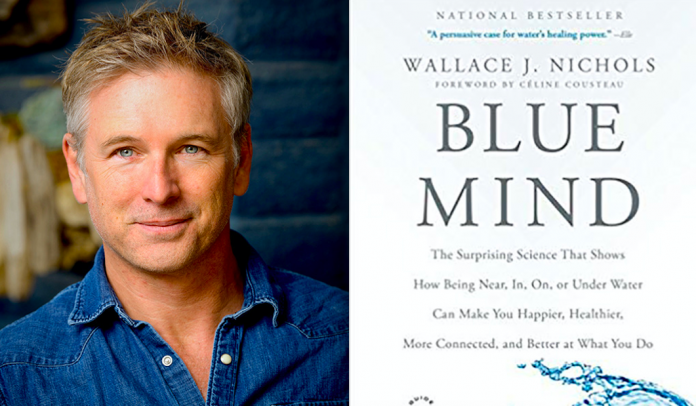 You might have spotted a few blue marbles lately — on a colleague’s desk, for instance, or perhaps on a friend’s table. If so, you’re in the presence of someone who has been introduced to “blue mind,” a concept put forth by Dr. Wallace J. Nichols, a marine biologist who visited Oak Bluffs library last month.

Nichols was there on the invitation of Carolina Cooney, the library’s program coordinator who’d scoured the web looking for relevant speakers for Maritime Month. Turned out that Nichols was coming to the Vineyard anyway — his brother is popular musician Johnny Hoy and Nichols’ niece was getting married. An invitation to speak to Islanders about blue mind while he was here was an easy “yes.”

“Blue Mind” is also the name of Nichols’ book, with an intriguing subtitle: The Surprising Science That Shows How Being Near, In, On, Or Under Water Can Make You Happier, Healthier, More Connected and Better at What You Do.

Nichols himself had approached Dr. Oliver Sacks, well-known for his many books, as well as his fascination with and writing about the Vineyard’s deaf community and sign language. Nichols hoped that Sacks would write about “blue mind.” Instead, Sacks urged Nichols to write about it.

Blue mind speaks to something that Nichols felt he understood but that hadn’t been named, specifically “the deep pull that water has, in all its forms.” Blue mind, he explains, is more than just the nice feeling we get when we’re walking along a beach, or paddling on a pond, though that’s part of it. Blue mind refers to the neuro-psychology that changes our bodies. When we’re around water, says Nichols, our breathing rate slows down, our heart rate slows, our skin temperature goes down, and our cortisol levels drop, leading to a reduction in inflammation. In short, our chemistry changes for the better.

What Nichols proposed at the Oak Bluffs library that Wednesday night in early October, where he premiered the companion documentary film to his book, and at the workshop held at the library the next morning, is a new conversation about water — one that includes “all the cognitive, emotional, psychological, social, physical and, of course, spiritual benefits.” Any discussion of water usually includes its value to us in terms of hygiene, ecology and, of course, economic benefits. Consequently, he says, our policies around water undervalue or devalue the roles of water that can transform our lives.

What Nichols wants to see is a recognition that water does so much more, including, he says, acting as “medicine.”

Water, or blue mind, is the antidote to what Nichols has dubbed “red mind,” our increasingly common culture of stress and anxiety. Blue mind, he suggests, should be taught to children, be a part of medical school curriculum, and should become part of our vernacular.

Access to water and an understanding of how it positively affects us could help treat everything from anxiety to addiction, trauma to stress-related illness. He calls bodies of water “schools for empathy,” something, he says, that’s “not just a beautiful metaphor, it’s beautiful science. It’s empowering to know that what you feel — that recharge experience — is quite real in a neurochemical sense, in a psychological sense.”

Valerie Cooper knows exactly what he’s talking about. Cooper is one of the infamous Polar Bears, a group that meets daily from July 4 through Labor Day at Inkwell Beach. She wasn’t at Nichols’ event at the Oak Bluffs library — she lives off-Island — though a few Polar Bears were.

“Members of the Polar Bears really felt like what he was talking about was putting words to something they’ve always felt,” says Cooney.

Cooper agrees. For 10 years, she says, every time she’s on the Vineyard, “I’ve gotten in that god-awful cold water every single morning at 7:30 am. And I wouldn’t miss it for the world. It’s one of the most invigorating, rejuvenating, relaxing, calming, spiritual-but-not-religious rituals that you can ever imagine.” This is blue mind at work, says Nichols, who joined the Polar Bears for their end-of-season dip in the frigid water. Cooper just calls it “magical.”

Perhaps that is the magic of blue mind. It puts words to something most of us understand intuitively. Being around water makes us feel better, be better. Exactly, says Nichols. Water heals. Literally, such as with Force Blue, a not-for-profit created by a former Recon Marine struggling with post-trauma and depression that helps veterans while preserving coral reefs and marine environments. It’s water that “helps our veterans and our first responders heal their physical and psychological and invisible injuries that they carry because of the work they do for us.” But also emotionally, by connecting us to something primal, reminding us to be awed.

Cooney still carries her blue marble, and has used it to explain blue mind to her children.

“It’s so universal to be able to tell people how it represents the world, and how much water there is, and how we are made of so much water. How it’s a part of us,” she says. “Even kids get it.”