Lee Fierro, 91, whose acting and directing career spanned 70 years, died on Sunday, in Ohio, of complications from Covid-19. 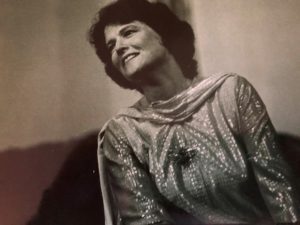 Her daughter, Dinah Hodgson, described her last few months as slowly declining in activity but still relatively healthy, with a spark for life. Lee tested positive for the virus the Monday before.

Lee’s decision to pursue an acting career took root at Miss Porter’s School in Farmington, Connecticut. As a shy student, the opportunity to take on a new persona and stand before an audience infected her with the call of the stage. In her own words, Lee revealed, “As I grew older, I realized that it was theater that basically saved me from the life of… Debutantes and so forth.”

She pursued her passion, studying with Andre Jilinsky at the Jalonge Theater School, in New York City, where she had been born and raised, and later met and married her first husband, Marvin Stephens. Jilinsky was a former member of Constantin Stanislavsky’s Moscow Arts Theater, in Russia.

Together, they moved to the Philadelphia suburbs to study with Jasper Dieter. At the small but renowned Hedgerow Repertory Theater, in Rose Valley, Pennsylvania, Lee dug into the dramatic roles of Arthur Miller, Bernard Shaw, Eugene O’Neill, and Henrik Ibsen, discovering the satisfaction of the interior exploration expected of her by Dieter.

As Lee’s family grew to include four children, she shared her talents at the nearby school in Rose Valley, teaching dance, drama, and impacting many students with her creativity.

Lee and her second husband, Bernard Fierro, with her then five children, moved to Martha’s Vineyard in 1969 where, together, they built a home. Lee coached Island residents in natural childbirth and was a vanguard in convincing the local hospital to accept midwives and coaches in the birth process.

In 1974, Lee was convinced to audition for Jaws. She turned down the offered role of Mrs. Kintner because of the character’s heavy use of curse words. The screenwriters rewrote the script for her, which she then accepted. That iconic performance, including the infamous slap of Chief Brody, played by Roy Scheider, gained her loyal fans from all over the world who continue to adore her to this day.

Lee is known and loved on the Vineyard for her 40 years with Island Theater Workshop. As Associate Artistic Director and later Artistic Director, she worked with over one thousand students during the summer with Children’s Theater and during the academic year with Apprentice Players. Year after year she penned scripts and composed lyrics for the students and was always careful that each child had a speaking role. Her plays delved into serious historical issues that encouraged the students to understand other lives and times.

One of her past students, Christopher Larkosh, said it beautifully this week: “Now it’s really on us, and this is the moment that you… prepared us for, with all those shows about dark places and times, in which things just don’t work, but by coming together we the Children can accomplish whatever we set our minds to, even save the world or make a new one.”

She acted in over one hundred plays ranging from Much Ado About Nothing and The Madwoman of Chaillot, to Medea and Talking With.

Although Lee loved acting, she found her greatest calling and satisfaction as a director. Through this role she had the increased ability to impact actors with the training she had received; challenging and supporting them, many very new to theater, to reach within and explore new areas of their emotional and psychological selves. This unusual approach with young and old alike has had a lasting impact on those Lee directed. One student, author Nicole Galland, credits Lee for not only Ms. Galland’s ability to write novels, but for the incredible legacy of many students following in their mentor’s footsteps.

Lee was absolutely dedicated to Island Theater Workshop. Kevin Ryan, her successor as Artistic Director of ITW, says eloquently, “I really want to make sure people remember there was more to Lee Fierro than that one scene (in Jaws), though she really did steal that scene from a lot of big actors. I want people to remember that she helped to build a community company that after 52 years is still here.”

Aside from the theater, Lee’s other passion was ‘her favorite hobby,’ singing. She composed many songs during her career and for decades was a devoted member of the Grace Church Choir and the Martha’s Vineyard Chorus.

In June of 2017, Lee moved to an assisted living community in Cleveland, Ohio. Although she hated leaving her beloved island, she spent her final three years enjoying family.

She is missed immensely and remembered always by her family. Her last words to family were “I’m fine,” reassuring us that all is well.