Albert P. Hutchinson, 78, of Aquinnah died suddenly Feb 8. Albert was born in Cambridge July 2, 1943 to Albert P. and Jane F. (Shea) Hutchinson. He grew up in Cambridge and attended Rindge high school and Boston University. He was a gifted musician and patient teacher of guitar. 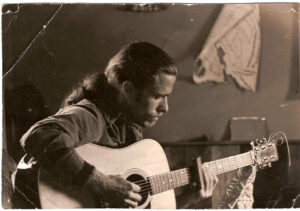 Albert lived in New York City in the late 60s, and was involved in music and graphic arts there. He joined the anti-war movement and was forever influenced, informed and touched by the ideas of social equality, social justice, one earth, animal rights, and as his sister Pam called it, “Peace, pot and poetry.” He lived on a commune in the 70’s and 80’s in Virginia with like minded, close friends. He lived in harmony with his environment and made friends with animals in ways that stretch imagination, including a wild snake who helped keep the rodent population down, and even curled up at the foot of his bed on occasion. His family often watched in awe as wild birds would land on him and even let him hold them in his hands. His belief in how the world should be was so strong, it seemed the world around him altered and changed to reflect that belief.

He was a natural engineer and understood how things worked. He repaired everything from cars to elevators and everything in between.

He had very good carpentry skills and helped his friends build and repair their homes. Jaguars were his particular passion and he bought and restored many when he lived in Washington, D.C. His coming into town (Cambridge) in a flashy, restored Jaguar was an infrequent but much anticipated delight. He met Veena, the love of his life, while in D.C. and lived many years with her.

Albert faced some severe hardships in his life but he did not let his troubles harden him and he remained a kind, loving man.

He lived in many places but he found a true home on Martha’s Vineyard. Albert gained and enjoyed a circle of people who loved him and whom he loved. He was brilliant, charming and funny. He told wonderful stories of his and his friends’ adventures and had several writing projects underway.

People knew they were somewhere special if they were at one of Albert’s dinner parties with his great food and much laughter.

Albert leaves his loving sisters Janet Whalen-Salvo and her husband Robert of Nashua, N.H., Claire Hutchinson-Lavin and her husband John of Ashby, and Pamela Hutchinson of Stoneham. He leaves many nieces and nephews, grand nieces and nephews, his close friends’ child and namesake, “Little Albert,” and his adoring grand nephew Luki. He was predeceased by his sisters Marie (MacDougall), Ann (Foley), and his brother Paul.

A celebration of life will take place in the near future.