Wednesday, the Brewhas play the S.O.P. in the early contest, and the Killers are home to the Wildcats in the latter.

Thursday has the Hurricanes vs. Blazers and the Killers home to the Treds.

League co-commissioner Bart Kent has posted the season schedule behind home plate at the park, a schedule of games that goes to August 8, when the post season playoffs begin. All teams will participate in the playoffs.

The Women’s Summer Softball League begins play June 14, with three games at Tisbury’s Veterans Park. Two games will begin at 6 pm, and a third, under the lights, at 7:30 pm.

Early games are the Shady Ladies (the 2010 champs) vs. the Creamers and the Rug Sox vs. the Late Fees. The 7:30 pm game features the Honeys and the Snaps.

The league will also be in action on Thursday, with a game at the small field in Vineyard Haven, Snaps vs. Creamers, and another at the West Tisbury School, Late Fees vs. Honeys. Both will begin at 6 pm. 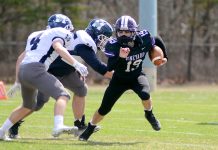