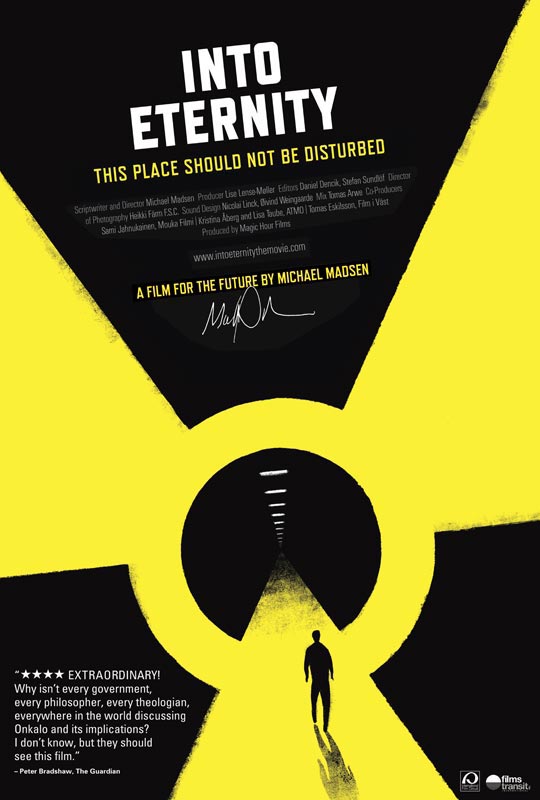 Western civilization has already produced between 200,000 and 300,000 tons of nuclear waste, and that amount is growing rapidly. In a screening sponsored by the Martha’s Vineyard Film Society on Saturday, June 11, the documentary “Into Eternity” examines the first attempt at a solution to this impending crisis.

The subject of the documentary is Onkalo, the world’s first permanent repository for nuclear waste, now under construction in Finland. The word means “hiding place” in Finnish, and this repository consists of three miles of tunnels being built 500 meters (1,640 feet) deep into Finland’s bedrock. When it’s completed in the 22nd century, Onkalo should keep the world safe from a portion of this type of radiation for 100,000 years.

“Into Eternity” does far more than simply lay out the dangers of radiation at a time when the pressure to find alternatives to oil and coal grows daily. It asks big questions about the world’s responsibility to future generations and what exactly can be understood in human terms by the concept of “eternity.”

While he does not offer the viewer a very uplifting message, Danish director Michael Madsen (not to be confused with the tough-guy actor best known for “Reservoir Dogs” and “Kill Bill 2”) has created a powerful, eloquent film about the Finnish effort to store spent nuclear fuel.

As the public learned from the earthquake and tsunami that recently breached several Japanese nuclear reactors, spent fuel rods can be stored temporarily in pools of water. Some scientists have proposed sending the rods in a rocket to the sun or sinking them in the depths of the ocean. But Finnish scientists believe underground storage like Onkalo provides the safest form of warehousing until the fuel rods no longer hold a danger of radiation.

Onkalo will function like a cocoon with barriers that complement each other, working to prevent the escape of radiation. Once it is decommissioned in 2100, the site will be sealed, with no further management or surveillance.

Then the question becomes how future civilizations can be protected. The curiosity inherent in human nature might lead people to explore Onkalo, which by then will be a place that no one may have any memory of. Wars, changes of government, natural phenomena like earthquakes and long-term climate changes in the future, may alter human life as we know it.

The scientists who are involved in construction of Onkalo speculate that humans — if they still exist in 100,000 years — will form the primary threat to its safety. They believe the site must be designed so that no prior knowledge will be necessary for future generations to appreciate the threat of exploring it.

Experts have hypothesized extensively about what kinds of informational signs might prevent future world citizens — or aliens from other planets — from drilling into Onkalo. Under consideration are messages on markers, rune stones, or in pictographs or even cartoons.

Whatever the warnings, they need to communicate that the site is not an important place, not a potential archaeological treasure trove like the pyramids, but strictly a place of danger. Some researchers even think any warnings might evoke insatiable curiosity, so another option would be to let Onkalo be forgotten.

Director Madsen shapes “Into Eternity” with a lot more than talking heads and gloomy shots of the Onkalo tunnel under construction, although both play a role. He uses still shots of the region’s natural beauty and elegantly frames the construction materials themselves. Other cinematic techniques include the use of slow motion as a form of emphasis and striking graphic design elements.

“Nobody knows anything at all,” says one expert.

On the optimistic side, future researchers could end up discovering a way to reprocess spent nuclear fuel, rendering it harmless, or humans might eventually discover a way to be inoculated against radiation. The director wisely saves such hopeful scenarios for the end of the documentary, since the prospect of widespread death from radiation is so grim that it’s natural to want to discount its seriousness.

“Into Eternity” ends with a haunting poem, which concludes, “Oh, the sad story. I am a cradle rocked by a hand in the depths of the vault. Silence.”

Anyone seriously committed to understanding the impact of nuclear power and seeking alternatives to our nation’s reliance on oil and coal should make an effort to see this film.