Those who shake their heads, wondering how it is summer has passed by so quickly, can measure the heralding points of the season with the Island’s traditional events. September, and the 16th Annual Labor Day Artisans Festival, marks the shift to the summer season’s end with an extravagant display of the Island’s artistic talents in the rustic, post and beam Agricultural Hall on the West Tisbury fairgrounds.

This year the Labor Day Artisans Festival will include close to 130 artists who will be setting up their booths to display their book arts, ceramics, sculpture, fine furniture, handblown glass, basketry, metals, fiber arts, mixed media, clothing, weaving, jewelry, photography, and more.

The festival is organized and managed by Andrea Rogers, an artist herself who displays wreaths, topiaries, potpourris, and decorative arrangements made from her homegrown lavender. She originated the Artisans Festival while she was a member of the Vineyard Craftsmen, doing almost all the work by herself. Since those early years, Ms. Rogers has been joined by an advisory committee of long-time exhibitors and professionals who jury the entries; she also produces the twice-weekly Artisans Festivals at the Grange Hall from Memorial Day through August, the Sunday shows through Columbus Day Weekend at the Grange Hall, and the holiday shows at the Agricultural Hall.

Handmade jewelry will be offered at the booths of Lorri Hart, Andrea Hartman, Stefanie Wolf, and Laura Artru Designs that features wampum, sea glass, and whelk. Lucinda Sheldon (Lucinda’s Enamels), Jamie Rogers (Stones of the Earth), and Kenneth Pillsworth will join the other distinctive and one-of-a-kind designers.

The show covers the complete spectrum of arts from the work of painter and cartoonist John Holladay, the photographs of Nancy Noble Gardner, the leather craft of Tom Barrett, and the book arts and linoleum block prints of Daniel Waters.

This year, with more than a week to recover from Hurricane Irene, is not the first year the show has followed the threat of storms and hurricanes. Last year, weather forced the cancellation of the Friday opening, but the intrepid exhibitors convened and put on the show as planned. Ms. Rogers has made it a point to credit the exhibitors with functioning “like a family,” and being so professional and well prepared they need little direction.

So once again the fairgrounds will be a festive scene with musicans, exhibits, and refreshments. People will be holding reunions with each other as they stroll the grounds, and Island artists will have the opportunity to meet and talk about their work with people who stop by their booths. It’s an Island tradition that captures the nature of the place: personal, accessible, and unique in many ways.

Proceeds from parking at this weekend’s Artisans Festival underwrite scholarships for graduating students from Martha’s Vineyard Regional High School who are interested in pursuing a career in art. 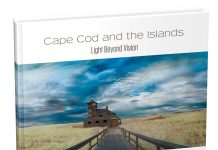 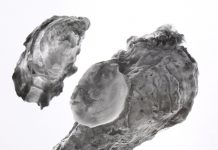 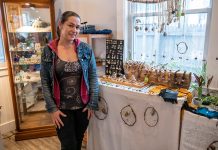