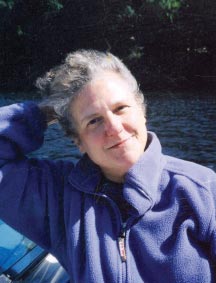 Sally Shiverick Nevin, an Island native, was the daughter of Dr. Robert W. Nevin and Helen Barbara Nevin. She was born on October 8, 1953, the sixth child of Mrs. Nevin.

She attended Edgartown Elementary School and Martha’s Vineyard Regional High School, where she fondly recalled being elected Miss Sophomore Class and graduated in the Class of 1971. She obtained an Associates Degree from the Katherine Gibbs School, prior to earning a BA in Psychology from the University of Massachusetts in Boston, in 1977. For a while after college, Sally worked in her father’s medical office in Edgartown.

She met her future husband, Frederick C. Rhyner, through a mutual friend during Columbus Day weekend 1972. Fred and Sally were married January 19, 1980 and had two sons: Dr. Matthew N. Rhyner and Charles F. Rhyner. From 1980 through 1988, the family resided in New Jersey, although Sally longed for her New England roots.

In 1989, the family settled in Bow, N.H. For a brief while, she ran her own business, Shiverick’s Selectives, making cookies for sale at local shops in Concord, N.H. But Sally’s greatest pride and joy was her family. She would always begin conversations with others by recounting any of their accomplishments, no matter how great or small. One of her proudest days was in May 2008, when both sons received college degrees on the same day from Emory University in Atlanta: Matthew received a Ph.D. in BioMedical Engineering and Charles received a B.A. in Music and Italian Studies.

Sally frequently returned to Martha’s Vineyard to enjoy the company of her family and many friends. Her favorite Island haunts were South Beach and the living room of her parents’ Edgartown house, where she could spend countless hours of lively and animated conversation with her father and her sister Barry.

Sally was a compassionate, caring person who developed strong ties wherever she lived. She maintained lifelong friendships with fellow Islanders Liz Herrmann, Paula Berube, and Debra Coletti Young. Although she had several ailments though the years, including breast cancer in 1994, Sally faced all the challenges in her life with courage and fierce Yankee determination. Her passing was sudden, unexpected, and peaceful. She was laid to rest near the graves of her parents and sister Kate at the New Westside Cemetery in Edgartown on Martha’s Vineyard on Oct. 1, 2011.