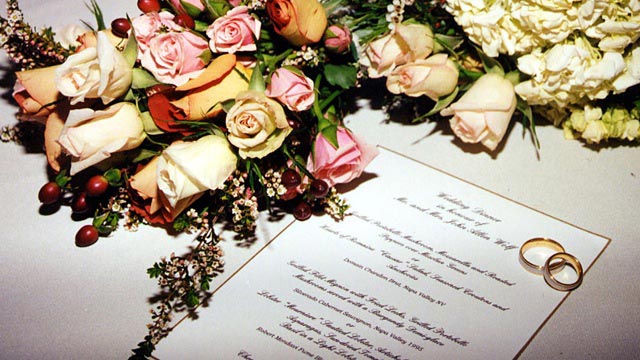 Kevin Hanover of West Tisbury and Cecilia Valdez of New York City were married at the East Chop Beach Club in Oak Bluffs on September 10, 2011.

The couple are living in New York City.

The bride is the daughter of Laurie Campos of Delaware, Ohio, and “Skip” Campos of Oak Bluffs. The groom is the son of Francis and Cynthia Buffone of Sturbridge.

Guinevere Higgins and Gerald Soriano were married on October 1, 2011, in Ivy, Virginia. The bride, daughter of Abigail and Tony Higgins of West Tisbury, is a self-employed organic gardener, and the groom, daughter of Fred and Florence Soriano of Oakton, Virgina, is a builder. The couple resides in Charlottesville, Virginia.

Elizabeth B. Anderson and Timothy M. Moriarty were married on October 15 at Blackthorn Farm in West Tisbury in a barn built by the bride’s father. They were married by Mary Breslauer of Chilmark, a longtime family friend.

The bride is the daughter of Sally R. Anderson and Richard J. Anderson, both of West Tisbury. The groom is the son of the Honorable and Mrs. Cornelius J. Moriarty II of Edgartown and South Hadley.

The bride is a graduate Skidmore College, and received her masters in nursing from Regis College. The groom is a graduate of Boston College, and received his law degree from Suffolk University Law School. Liz is a nurse practitioner for Hampden County Physician Associates in Feeding Hills, and Tim is a criminal defense attorney in private practice in West Springfield. They live in the town of Florence.

Ms. DuVall works as a makeup artist and sales consultant for MAC Cosmetics in Clearwater.

Mr. Baptiste, a 2000 MVRHS graduate and Coast Guard Veteran, is a licensed Captain for StarLite Dining Cruises in Clearwater Beach.

A wedding celebration is planned for September 2012 on the Vineyard.

Fighting for justice and inclusion