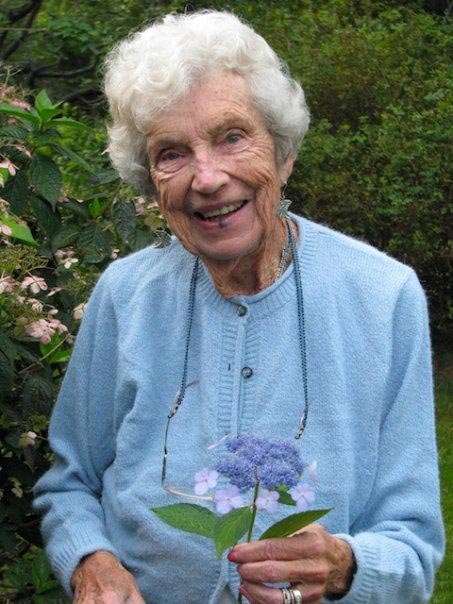 On April 9th, 2012, Eleanor Wall Jensen of Chilmark and Delray Beach, Florida, died peacefully in her sleep at the age of 94.

Only last year, Eleanor was grandmother of the bride at her oldest granddaughter’s wedding, leading the wedding party by dancing into the reception to the delight of all. That was the essence of Eleanor, a gracious, caring, and loving mother, grandmother, and friend to so many on the Vineyard and in Delray Beach. She enjoyed her family and friends, as well as a good party, and will be missed by all.

She was born in 1918 in a brownstone house belonging to her grandparents in New York City and grew up in Great Neck, Long Island, with her brother, Sterling Hollinshead Ivison Jr. (USN Retired), and her sister, Lisbeth Lyle Young.

Eleanor began a long association with the Vineyard in 1928, vacationing with her family for the first time in East Chop. She was raised on the Vineyard during the summers and was active with her two siblings at the Tennis Club and the Beach Club, and shared her brother’s love of sailing. After graduating from Bradford Junior College in 1939, she taught dancing to the youngsters at the East Chop Tennis Club during the summer before beginning work in New York City.

The summer of 1944 on the Vineyard was most memorable for Eleanor. She met her first husband and the love of her life, Howard Pratt Wall, at East Chop. In December of 1945, Eleanor and Howard were married and moved to an apartment in New York, starting a wonderful family. By 1953, the family had grown so that the couple with their three children moved to the suburbs of New Canaan, CT, becoming involved with the Silvermine Guild of Artists and school activities.

Eleanor and Howard bought land in Chilmark in 1957, built a house, and moved up-island. The house became the center of all things family with summer adventures including the Chilmark Community Center and Short Beach on Menemsha Pond. She was an avid gardener, sketch artist, member of the Vineyard Garden Club, frequent award winner at the annual West Tisbury Agricultural Fair, and member of the West Tisbury Congregational Church.

With Howard taking early retirement in 1965, the family moved to winter quarters in Boca Raton, Florida, and Eleanor continued to summer in Chilmark, even after her husband’s death in 1971.

In 1976, she met and married Joseph W. “Wally” Jensen and they moved to Delray Beach, FL. The Delray home spoke of the Vineyard with her paintings, photographs, and carved decoys. El and Wally travelled to the Vineyard for the summers and around the world on various winter trips. At her villa at Abbey Delray, Eleanor continued her love of gardening, sketching, raising orchids, and driving around in her golf cart to volunteer in various activities at Abby Delray, and was busy with her yarn projects, knitting scarves for everyone. Her family would visit her in Delray Beach — her daughter and family at Christmas time and her sons in mid-winter to escape the New England cold.

The last of her 80 years on the Vineyard was in 2010, staying at the family home in Chilmark. Son Sterling cooked her gourmet dinners and kidded her about driving “Miss Daisy” to the various flea markets. Her neighbor and adopted third son, Alex Preston, brought mom fresh caught fish from his charters, and son Howard serenaded her in the evenings with bagpipes.

Eleanor always knew she would return to the Vineyard. Her ashes will be buried next to Howard at Abel’s Hill in Chilmark after a memorial service held on Martha’s Vineyard this summer at the West Tisbury Congregational Church.