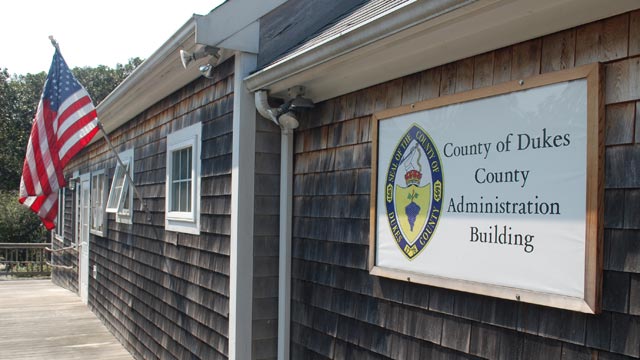 The County of Dukes County was first established in 1683 as part of the province of New York and was later annexed by the Massachusetts Bay Colony in 1691.

Until 1993, three elected, paid county commissioners presided over county government affairs and departments not under the control of elected officials.

In 1994, voters created a new form of county government that delegated general legislative powers to the seven-member board of unpaid commissioners, while giving the county manager full control over the county administration.

Although the county manager serves as the administrative manager for the seven county commissioners, the actual responsibilities of the job are limited.

Most of the money for county services directly under the control of the county manager comes from individual town assessments, based on real estate valuation. Taxpayers are often unaware of the amount because it does not appear as a line item on annual town meeting warrants.

County commissioners appoint a voting member representing the Vineyard to the Steamship Authority board. They also appoint the members of the airport commission, which is responsible for the Martha’s Vineyard Airport, the state’s only county-owned airport and business park.

There are five candidates and seven open seats on the Dukes County Commission ballot.

A provision of the county charter could allow a write-in candidate from the towns of Aquinnah, Chilmark, or Edgartown, not now represented on the ballot, to easily win election.

Long-serving Mr. Alley has been a member of the county commission for 29 years.

Mr. Hallahan is a health care and public policy consultant for state government and professional organizations.

Tristan Israel is a Tisbury selectman.

Melinda Loberg is chairman of the Lagoon Pond Bridge committee and serves on a variety of Island organizations.

Mr. Brathwaite, former staff director for the city of Newton, recently retired and decided to run for office because he wanted to get involved in Island affairs and the county “seemed like a good place to start.”