The state’s finance and development agency has issued an $8 million lease to help Boston MedFlight buy a new helicopter to replace an older one, the State House News service reported.

MassDevelopment announced Monday that the tax-exempt lease will help the company, which transports ill and injured patients, keep its fleet up to date. Boston MedFlight operates three of the four medical helicopters in Massachusetts, according to MassDevelopment.

Martha’s Vineyard Hospital relies on Medflight to transport patients by air to hospitals in Boston when patients need urgent medical care unavailable on the Island. 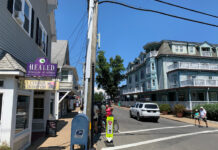