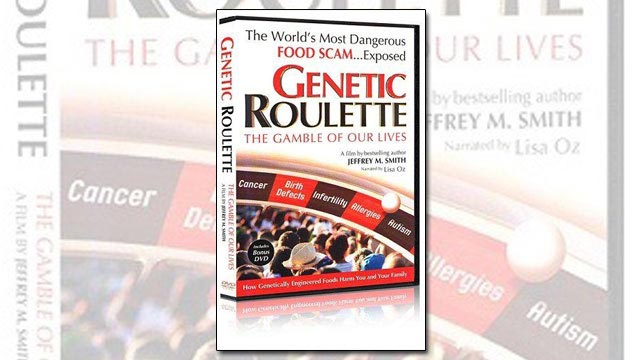 Produced by the Institute for Responsible Technology, this film is about the health dangers of genetically modified food (GM). It provides compelling evidence to help explain the deteriorating health of Americans, especially among children, and it offers a recipe for protecting ourselves and our future.

Written and directed by outspoken GM critic and author Jeffrey M. Smith, the film is an unsettling tour through a myriad of serious health conditions and the possible connections with genetically altered crops, from allergies and intestinal disorders to diabetes and autism.

Through a dramatic series of interviews and statements from experts in the fields of nutrition, agriculture, and medicine, the film suggests that we are putting our health at risk by eating genetically engineered food. While little direct evidence of a link is revealed, a mountain of circumstantial evidence is presented.

Lawrence Plumlee, MD, a former medical science advisor with the Environmental Protection Agency (EPA) office of research and development, says that the clearing of new unique products for human consumption without careful independent testing is one of the most alarming things he has seen in Washington.

Another doctor points out that the research has turned out to be very disturbing and that several animal studies indicate serious health risks are associated with genetically modified food consumption, including infertility, immune system and gene dysregulation, accelerated aging, and effects on various organs.

The film makes the point that we have been exposed to genetically manipulated food for 20 years. “This impacts everything and everyone, it is an every living creature issue,” states Lisa Oz, the narrator, producer, writer, and actress. “It is the most dangerous thing facing human beings in our generation.

“Americans get sick more often than Europeans and people in other industrialized countries and they’re getting sicker.”

There will be a discussion led by Jan Buhrman and Sue Hruby from Slow Food M.V. after the film.

In a press release, Slow Food M.V. said it is committed to celebrating, preserving, and supporting local food production, and to creating a world where real food, healthy farms and vibrant communities are the norm. “It’s in the context of this commitment that Slow Food wishes to begin an education campaign on the Vineyard to improve understanding of what we know, and don’t know, about GM foods, and where the evidence is pointing.”

There will be a second showing of the film this summer on July 28. For more information, go to slowfoodmarthasvineyard.org.