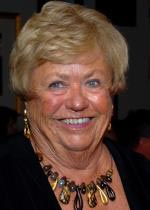 Constance “Connie” H. (Hilton) Gerard, a longtime resident of Marshfield, died on April 21. She was 77.

Connie was born and raised in Framingham. She graduated from Framingham High School in 1953 and Forsyth Dental School in 1955. Prior to her marriage and family, she was employed as a dental hygienist for several years.

Together with her husband, Arnon Gerard, Connie spent countless hours building the family turkey business in Marshfield from a summer-only establishment to a thriving, year-round enterprise, utilizing many of her own recipes.

As a child, Connie spent her summers on Martha’s Vineyard at her grandmother’s inn, the Attleboro House, enjoying the sand, sun, ocean, and riding the Flying Horses.

As an adult, she continued to enjoy the sand, sun, and ocean and spent as many hours as possible from April through October at Rexhame Beach with her beloved Beach Girls. The Circle of Friends swelled or diminished on any given day, but there was always one constant — Connie.

Connie was an avid and skilled knitter, especially making beautiful creations for her precious grandchildren, and quite often was doing it on the beach. Many of her wonderful masterpieces were sprinkled with beach sand. She also enjoyed reading, finally beginning to understand how her Kindle worked.

She served the community in many anonymous ways and was a member of the First Congregational Church, donating generously, especially to the annual church fair. But her greatest service was to her family. She created many fond memories and traditions, gave advice only when asked, shared her love of travel and the beach, had a generous spirit and was full of unlimited love and affection.

A Funeral Service was held at the First Congregational Church 1981 Ocean Street Marshfield on April 25. Interment was in the Couch Cemetery, Union St, Marshfield

Contributions in Connie’s memory may be made to the Nathaniel Taylor Fund 22 Craddock Rd. Marshfield, MA. 02050