Moviegoers in Oak Bluffs may be out of luck this summer. The Island Theater is undergoing major repairs, and the Strand Theater’s availability as a backup is uncertain, according to owner Benjamin (“Buzzy”) Hall Sr. He said the Capawock Theatre in Vineyard Haven will reopen, although he does not have a date yet. Mr. Hall shares ownership of the theaters with his sons, Benjamin Jr. and Brian.

Winter dealt a major blow to the Island Theater, in Oak Bluffs on the corner of Circuit Avenue. Mr. Hall Sr. said a large part of the theater’s roof blew off during a storm, and its replacement was delayed because of weather.

“So it kept leaking, and the inside of the building was badly damaged,” he said. “We’re trying to save the building, never mind it being a movie theater. The timing is such that it doesn’t look good for opening it for the summer season.”

His son Benjamin Jr., an Edgartown attorney, told The Times in a phone call Tuesday that he is involved in trying to figure out a contingency plan, as a principal in the company that is the landlord for the movie theater properties. His father runs the movie business separately.

Refuge at the Strand?

“We’re in the middle trying to negotiate possibly using the Strand again, if the Island can’t be operated,” Mr. Hall Jr. said.

Although the Halls made upgrades in the theater, which is located on Oak Bluffs Avenue across from the Flying Horses carousel, it has not been used as a movie theater for more than a year.

“We’ve found we made more money renting the Strand for other purposes than just movies,” Mr. Hall Sr. said.

Currently there is a long-term lease of the property for a bike rental/moped operation, his son Ben explained. “We’re trying to figure out a way we can get back the auditorium and run movies in there and continue to operate in Oak Bluffs this summer.”

The Island Theater’s most recent use as a movie theater was in August 2012, when the Sony Corporation leased the auditorium for a private screening and the Island premiere of the movie “Sparkle.” Almost 200 invited guests attended, including producer Debra Martin Chase, President Barack Obama’s advisor Valerie Jarrett, and Attorney General Eric Holder.

Mr. Hall Sr. said of the three theaters, the Strand has the nicest auditorium, with stadium seating and good sight lines, and the best speaker system. “With a digital projector, it would be perfect,” he added.

The Hall family made major renovations to the Capawock Theatre on Vineyard Haven’s Main Street starting in 2004. The vintage 1912 movie theater was closed until November 2006. Brian Hall and one helper did most of the repairs, in addition to painting inside and out and installing new seats.

The loss of the Main Street anchor business was a blow felt up and down the street during 2004-2006 and generated a campaign of public criticism, and veiled threats of eminent domain.

It also led to the formation of a grass roots organization of year-round residents, summer visitors, and Island business owners who encouraged and supported the theater, urging it to reopen and remain open.

For the past few years, the Capawock has offered a winter series of Sunday opera screenings to help weather the off-season slump. Although Mr. Hall Sr., an opera and classical music enthusiast, purchased digital equipment a few years ago in order to offer high definition screenings of operas at the Capawock, he said the system is not up to the current standards of most of the movie distributors. And although the theater still has a 35-mm projection system, many distributors are cutting back on 35-mm prints.

“Our present digital projector is superb, but the major distributors won’t let us use it, because it is not DCI [Digital Cinema Initiatives] compliant,” Mr. Hall Sr. said. More than 90 percent of the movie theater industry has converted to new projectors that meet voluntary specifications set by DCI, created in 2002 as a joint venture by Disney, Fox, Paramount, Sony Pictures Entertainment, Universal, and Warner Bros. studios.

Mr. Hall Sr. said he would have to invest a minimum of $40,000 for a better digital projector. “Many independent theater owners are being wiped out because of the tremendous investment it takes for DCI projectors,” he added.

A matter of numbers

Mr. Hall said that any improvements made at his family’s theaters come out of their own pockets. “My sons and I have run those theaters for the last 10 or 15 years and have not taken a paycheck,” he added. “We do it for the benefit of our employees and the community and also because we’ve felt some responsibility. But the expenses are becoming insurmountable at this point.”

It doesn’t help that the number of people going to see movies in theaters is the lowest in decades, Mr. Hall said.

“To support movie theaters you need at least 50,000 people within a 25-mile radius year-round,” he said. “But if you only have that kind of population for about 100 days, as we do in the summer season, you’re cutting any possibility of profit by two-thirds. So you try to make money in the summertime and in the winter, if you can, serve the community and maintain your good staff so they’ll be around for you the next summer.”

Given the costs of saving the Island Theater’s old building, coupled with the need for a new digital projection system, Mr. Hall said he and his family are weighing their options.

“We’re looking to the future to see what we might use the building for; performing arts is still in the picture,” he said.

This article was updated May 29, 2013, to reflect a correction from the print version. The Island Theater, not the Strand, was the venue for the private screening and premiere of the movie “Sparkle.” 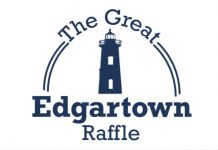