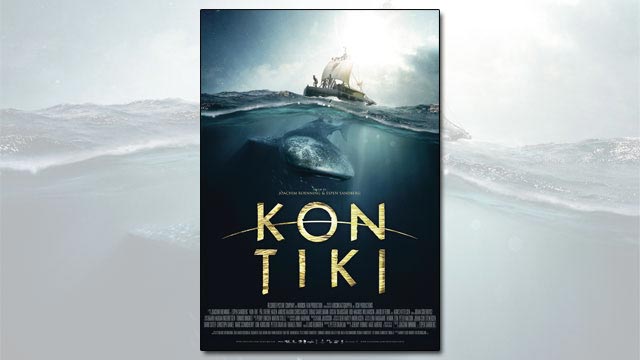 Ride the Pacific with six adventurers on a primitive balsa wood craft who must rely on their sense of mission to pull them through the dangers of a trans-oceanic voyage.

Sail Martha’s Vineyard, in collaboration with the Martha’s Vineyard Film Society, is presenting a screening of the 2012 film “Kon-Tiki” at the Film Center at Tisbury Marketplace on Friday, June 21, at 6:30 pm.

The film is based on the 1950 Thor Heyerdahl documentary of his epic 4,300-mile Pacific crossing from Peru to the South Pacific on a balsa wood raft in 1947, in an effort prove it was possible for South Americans to settle in Polynesia in pre-Columbian times.

The movie does a superb job of putting the audience on the boat and in the water with the six sailors as they survive tidal waves, sharks, and all the dangers the ocean can muster.

There will be a wine and cheese reception at 6:30 pm preceding the showing and a brief presentation by noted Polynesian academic Sam Low, recently returned from a five-week tour of Hawaii promoting his new book “Hawaiki Rising, Sailing in the Wake of our Ancestors,” a book that recounts a revival of Hawaiian culture through the building and sailing of a traditional Hawaiian boat.

The proceeds will be shared by Sail M.V. and M.V. Film Society.