In 1960, three Smith College professors, including respected writer and literary critic Newton Arvin, were arrested for possession of obscene photos. At the time, both the office of the U.S. Postmaster General and the town of Northampton (home of Smith College) were targeting homosexuals through anti-pornography laws.

The careers of all three men were destroyed.

While the event was highly publicized at the time and came on the heels of, and had echoes of, the McCarthy era communist witch hunt, the Smith College episode has been largely forgotten.

Former New York Times writer Dinitia Smith chose to resurrect the story for her first play, “Dirty Pictures,” which will be performed at a reading on Monday, August 19, at the Martha’s Vineyard Hebrew Center. The reading is a production of The Vineyard Playhouse’s Monday Night Special series and is directed by Playhouse artistic director MJ Bruder Munafo.

Ms. Smith served as a cultural correspondent for The New York Times from 1995 to 2006. Before that she enjoyed a successful career as a filmmaker and novelist. She won an Emmy award for her documentary “Rape” and was nominated for an Emmy for another film on childbirth. In all she made 15 dramatic and documentary films. In 1971, she was the second woman to ever show at the New York Film Festival.

As with her films, Ms. Smith’s novels have touched on controversial subjects. Her first book was based on an incident where a group of college students aided in organizing factory workers in Vermont. Her most successful novel, “The Illusionist,” dealing with transgenderism, was inspired by an actual hate crime in Nebraska.

Ms. Smith left her job at The New York Times in order to focus on another novel and her play. Since then, “Dirty Pictures” has been presented a number of times as a reading in New York City and has undergone many changes.

The former journalist became interested in the story when she realized that few people, even students at Smith, her alma mater, were aware of the incident. “I discovered that a number of people especially younger people didn’t know about this period of life when gay people were targeted in such a direct way by the government,” Ms. Smith said. “I think the story resonates today in the ongoing persecution of homosexuals and in the newly-revealed government surveillance of the U.S. Mail.”

Newton Arvin was the author of critically well-received biographies of Walt Whitman, Nathaniel Hawthorne, Henry Wadsworth Longfellow, and Herman Melville. The latter was a National Book Award Winner. He was involved with the young Truman Capote, who dedicated his first book, “Other Voices, Other Rooms” to his mentor and lover. Politically Mr. Arvin was a leftist who notably took part in a protest of the Sacco and Vanzetti verdict. He was friends with Lillian Hellman and Edmund Wilson and included Sylvia Plath among his students.

After his arrest, Mr. Arvin pled guilty to the charges and was given a one-year suspended sentence and probation. He was suspended from teaching and removed from the board of the writer’s colony Yaddo, an institution he had been involved with for many years. He briefly spent time in a state hospital after suffering from suicidal depression, and his career was virtually over. His co-defendants didn’t fare much better.

While Ms. Smith had been interested in the story for some time before she considered its dramatic possibility, it was the publication of “The Scarlet Professor,” a 2001 biography of Mr. Arvin by Barry Werth that renewed her interest in the subject.

It was shortly before she left The New York Times that Ms. Smith decided to write the play. At that time one of the other persecuted professors, Joe Dorius, died. Through an obit writer at the Times, Ms. Smith obtained contact information for a relative of Dorius.

“This set off all kinds of memories and thoughts about this event,” Ms. Smith said. “Some kind of outrage sprang up in me. Embedded in this story was this social hypocrisy. I felt even though I’m not gay, it was all of a piece. The denial of rights.”

Ms. Smith’s extensive research included an interview with Ned Spofford, the only surviving victim of the episode.

“I thought, ‘There’s a play here,’ Ms. Smith said. “I found all sorts of documents. I hired a researcher in Massachusetts to go over the old court records. My husband is a historian. He helped give me ideas on how to find information.”

The real challenge, however, was turning facts into drama. “One of the tasks of playwriting is turning away from the documentary,” she continued. “I wanted to adhere to the basic truths but a play has to be a work of art.”

Luckily, the story has many dramatic components including two trials (which have been combined into one for the play) and the betrayal by Mr. Arvin of the other two professors, one of whom he may have been in love with.

Among the themes the play tackles, according to Ms. Smith, are “the betrayal of someone you love, naming names, public disgrace, and the effort to build lives after this humiliation.” 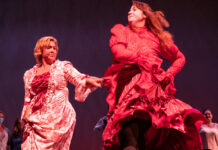 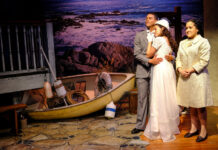 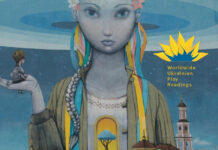