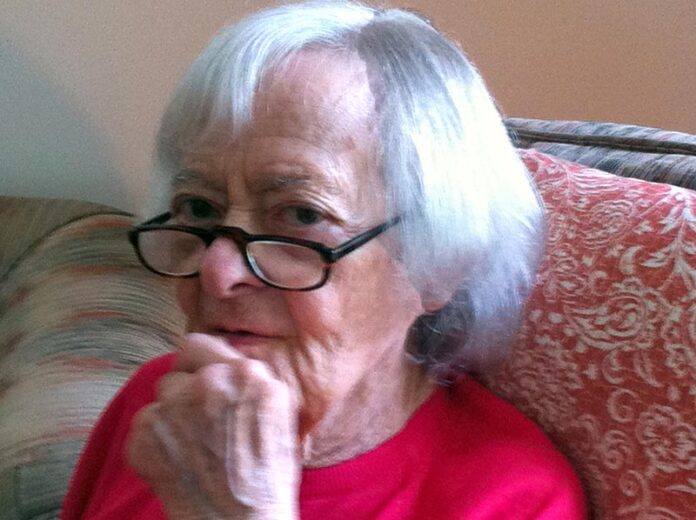 Thelma was born June 1, 1920 in Portland, Oregon to Victor and Mabel Bouchet. Her mother was from a pioneer ranching family in eastern Oregon, and her father was born in Ontario, Canada. He worked for the Union Pacific Railroad and later had a hardware store on Salmon Street in Portland. Thelma attended public schools in Portland.

After high school she spent the summer on a horseback camping trip: they rode approximately 300 miles from Mt. Hood through the Cascade Mountains to

Crater Lake, along the Oregon skyline trail, camping the whole way. She then attended the University of Oregon where she earned a BA in romance languages. She spent one college summer in San Francisco working at the City of Paris department store engraving jewelry. She roomed with her college friend Lillian; they dyed cheesecloth chartreuse and hung it as curtains in their apartment. After college she taught high school for a year in the eastern Oregon town of Enterprise. She remembered many students rode their horses to school.

She moved to Nogales, Arizona, to work for the U.S. Department of Censorship in the war effort, and in 1943 she enlisted in the Navy. After training to be an air controller she was stationed at Kanehoe Naval Air Station in Oahu, Hawaii. She remembered a tsunami covering the runway and having to evacuate.

After the war she went to work for the U.S. State Department in Paris, helping implement the Marshall Plan. During this time she and a friend rode their bikes all over France. While in Paris she met her future husband, Araldo Cossutta. They moved to Boston where she worked at the Widener Library at Harvard while he attended graduate school in architecture. They moved to New York City and had two children, Louis and Renée.

She loved city life, and also delighted in summers on the Vineyard starting in the mid 60s.

In the late 70s, after divorce, she moved to the Island full time, building her own house off Middle Road in Chilmark, where she lived since 1984. She loved the peaceful life and had many friends.

She is survived by her son, Louis Cossutta of Chilmark, her daughter, Renée Cossutta of Sierra Madre, California, and her grandson, Eben Cossutta, a senior at Suffolk University in Boston.

Donations in her memory can be made to the League of Women Voters where she was a proud member for over 50 years.