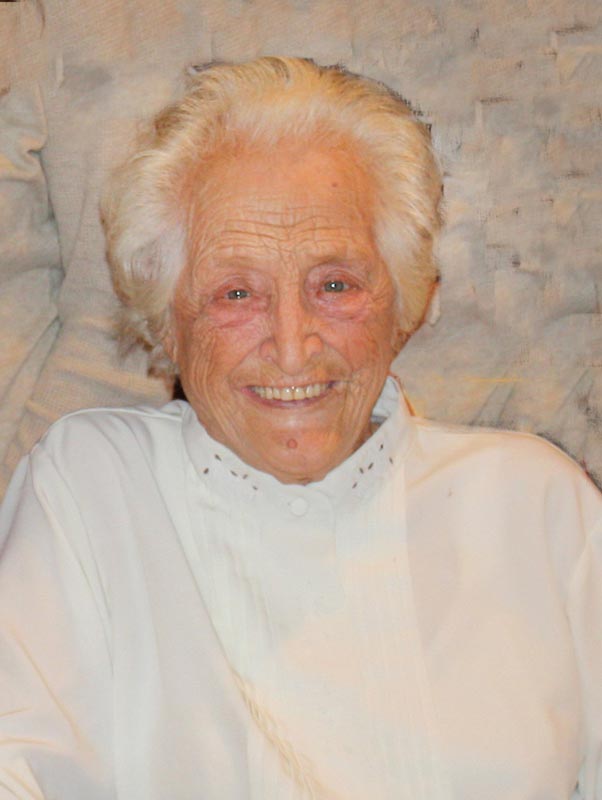 Dorothy Mae Gazaille West, affectionately known as “Dottie or Dot,” died peacefully on November 7, 2013, surrounded by her family. She was 89.

Dot was born on January 2, 1924 to Joseph Gazaille and Mary Pinsonnault Gazaille, the second youngest of seven children. Dot was born and raised on the Great Plains where she remained throughout her life. Born in what is now the Square Rigger Restaurant previously located off the shores of Great Pond.

Dot was married to Robert E. West on September 8, 1945. Together they lived in a farmhouse which Dot independently purchased while her husband-to-be was overseas. This same farm house is where Dot lived into her final days. Dot’s life was exemplified by hard work, strength, and determination. Best remembered by her infectious laugh, quick wit, and charismatic personality, once encountered she was impossible to forget. Filled with spunk, Dot had a playful, mischievous side best seen in the gleam of her eye and the words she spoke, “I will never tell” followed by a laugh only Dot could laugh.

Dot was an energetic and loving soul who could never be found sitting still too long. Always on the go, she could be found visiting with her family close by, or perusing the Island by car or foot. In fact, until just recently Dot could frequently be found walking Great Plains. Her vast knowledge and love for the Island was passed on to those she encountered. Dot loved to share Island history, which made her one of the best tour guides for Stage Coach Taxi. Dot was also well known at the recycle center in West Tisbury, informally nicknamed by some as “Dottie’s Boutique,” where she volunteered countless hours.

Dorothy was predeceased by her husband, Robert E. West, her son Vernon West, her brothers, Herman, Arthur, and Larry, and her sisters, Gertrude, Leona, and Corinne.

We are forever changed for loving her — you will always remain in our hearts and your footsteps on Great Plains.

A butterfly lights beside us

for a brief moment,

its glory and beauty belong to our world.

But then it flies on again,

and though we wish it could have stayed,

we feel so lucky to have

seen it at all.

A visitation for family and friends will be held on Saturday, November 16, 9:30–10:30 am in the Chapman, Cole & Gleason Funeral Home, Edgartown Road, Oak Bluffs. Her funeral mass will follow in St. Elizabeth’s Church, Main Street, Edgartown. Burial will be private in the family lot of the New Westside Cemetery. A gathering to follow her funeral mass will be held at the Legion Hall in Edgartown. In lieu of flowers, donations may be made in memory to the Katama Airfield Trust, PO Box 2908, Edgartown, MA 02539 or Edgartown Council on Aging, PO Box 1295, Edgartown, MA 02539.