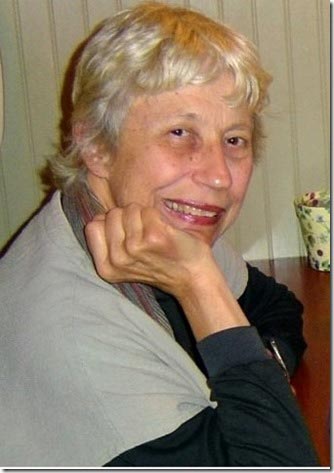 Jo-Anne Scotford Rice of West Tisbury died peacefully Christmas morning at Falmouth Genesis in Falmouth after an extended illness. She was 79 years old.

Jo-Anne Scotford was born on Sept. 10, 1934, in Lakewood, Ohio, to Paul and Gwen (Shoaf) Scotford. She graduated from Lakewood High School in 1952 and from Ohio Wesleyan University in Delaware, Ohio, with a degree in Fine Arts, in 1956. In 1958, she met and married Richard Doyle Rice, the nephew of a neighbor.

After receiving a master’s degree in Art Education from Case Western Reserve University in Cleveland, Jo-Anne taught high school and college art classes before giving birth to her only child, Doyle Scotford Rice, in November 1964. Shortly thereafter, the family moved to Martha’s Vineyard, in order to be closer to Jo-Anne’s mother, Gwen J. Scotford, who was a longtime resident of the Campground in Oak Bluffs.

She was primarily a mother and homemaker during Doyle’s childhood, though she continued to paint, draw, and write poetry. The family moved back to the Cleveland area in 1969 before finally returning to Martha’s Vineyard for good in 1978, where Jo-Anne and Richard lived until the present day.

Jo-Anne and Richard lived in several locations in Vineyard Haven and Oak Bluffs before settling in their lovely house in the woods of Longview in West Tisbury in 1990, a house that was built primarily by Richard and Doyle.

She also earned a second master’s degree in Art Therapy from Lesley College in Cambridge, Mass., in 1987.

Jo-Anne, also known as Jo or Jody, was a longtime member of the Unitarian-Universalist Society of Martha’s Vineyard. She had an avid interest in Buddhism and attended many meditation and study retreats at the Insight Meditation Society and the Barre Center for Buddhist Studies in Barre.

She loved family, being a loving and devoted grandmother, her cats, her mother’s blue cottage in the Campground, Cleveland, the woods, beaches in summer, travel to Mexico, Italy, and South Africa, art museums, painting, poetry, folk music, good films, theatre, the past, genealogical research, Buddhist teachings, being a religious liberal, meditation, yoga, swimming at State Beach, and living near Lambert’s Cove Road.

She is survived by her husband, Richard; her son, Doyle, daughter-in-law Nicole, grandson Matthew, and granddaughter Danielle of Silver Spring, Md.; her half-brother John Scotford of Ohio; several other cousins and relatives in Ohio and South Africa; and her cat Blinker of West Tisbury.

A memorial service for Jo-Anne will be in the spring or summer of 2014 at the Unitarian church in Vineyard Haven.

Contributions can be made in her name to the Unitarian-Universalist Society of Martha’s Vineyard, P.O. Box 1236, Vineyard Haven, MA 02568, or to the Barre Center for Buddhist Studies 149 Lockwood Road, Barre, MA 01005.