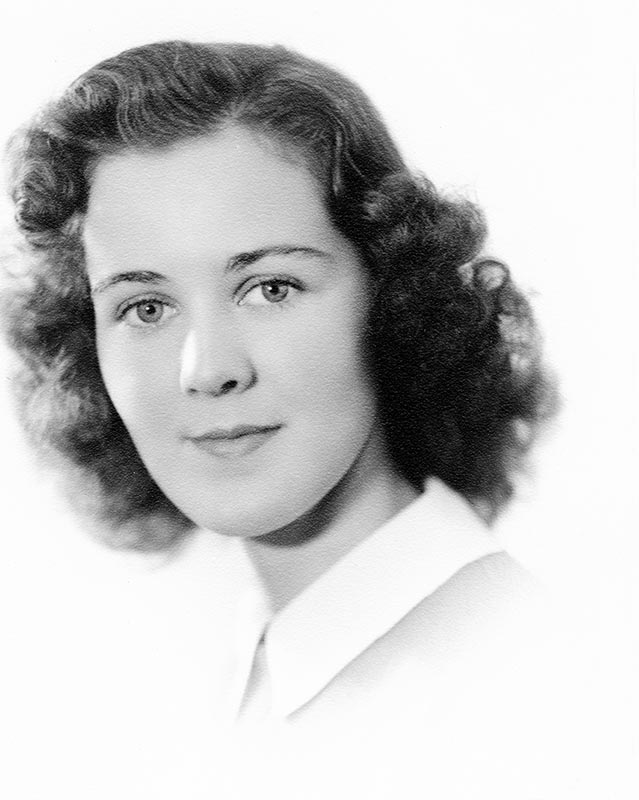 Geraldine Davis Cronig died peacefully after a lengthy illness at her home in Oak Bluffs on December 30 with her daughter at her bedside. She was 89.

Gerry was born in Laconia, New Hampshire, on April 26, 1924, to Timothy Patrick Reidy and Anna Fitzgerald Reidy, both the children of Irish immigrants from the County Cork and County Kerry regions of Ireland. Gerry spent her formative years growing up in the Great Depression. She attended Laconia High School and graduated soon after the outbreak of World War II. Like so many of the “Greatest Generation,” her personal life was put on hold as the War erupted: her high school sweetheart, Charlie (Charles A. Davis Sr.), enlisted in the U.S. Navy and served in the Pacific Theater, while she simultaneously entered the U.S. Cadet Nurse Corps, undergoing her medical training at the Margaret Pillsbury Hospital in Concord, N.H., and Bellevue General Hospital in New York, N.Y.

During her training and also after earning her R.N. certification, Gerry worked at Veterans Administration hospitals in New Hampshire and New York tending to injured servicemen returning from the European Theater. During VJ Day on August 14, 1945, she was one of the many Bellevue Hospital nurses who flocked into Times Square after their work shift, in jubilant celebration as President Harry Truman announced the end of the war with Japan. LIFE Magazine photographer Alfred Eisenstaedt was there to capture his famous “VJ Day Kiss in Times Square” photograph, of a sailor embracing a nurse.

After the War, Gerry and Charlie reunited; Charlie was discharged from the Navy and they both returned to Laconia and were married on April 30, 1946. With the help of the G.I. Bill, Charlie completed his college education, and several years later the couple found themselves living in northern New England near the Canadian border with three young children as Charlie began his first job out of college, as a high school principal in Bridgewater, Maine. In 1959, after living in Maine for several years, the family moved to Martha’s Vineyard when Charlie accepted a job as the first principal at the brand-new Martha’s Vineyard Regional High School. He held that position for over 20 years.

When her children were old enough to attend public school, Gerry resumed her full-time nursing career in the early 1960s, and for 25 years worked at the Martha’s Vineyard Hospital where, in addition to her other duties, she was the Charge Nurse for the Hospital’s Acute Care Unit. Upon her retirement from nursing, Gerry also served as a member of the Martha’s Vineyard Hospital’s Board of Directors.

In her spare time, Gerry greatly enjoyed being with her family and close friends. She loved summer beach parties and cookouts at South Beach and Chappaquiddick, socializing with her “Stitch and Bitch” group members, playing golf, and taking long walks. Her greatest joy of all, though, was her role as loving wife, mother, aunt and “Nana.” Gerry possessed a strong religious faith and spirituality and was very active with the Good Shepherd/Our Lady Star of the Sea Catholic Church in Oak Bluffs where she was a member of the Parish Council and a Eucharistic Minister. She was awarded the prestigious Marian Medal by the Fall River Diocese.

Gerry’s husband, Charlie, passed away in 1984, after 38 years of marriage, but a few years later, a wonderful man came into her life. On September 11, 1987, Gerry married Robert Cronig, longtime owner of Cronig’s Market in Vineyard Haven. Robbie and Gerry resided in Oak Bluffs after they were married, enjoying a very active social life with their many friends and family members and traveling extensively, including trips to Portugal, the Caribbean, Ireland, and numerous trips to California.

In lieu of flowers contributions can be made to Hospice of Martha’s Vineyard, P.O. Box 2549, One Hospital Road, Oak Bluffs. Arrangements are under the care of the Chapman, Cole & Gleason Funeral Home, Oak Bluffs