During the winter we yearn for bursting cherry tomatoes, snappy green beans, sweet golden kernels of corn, and earthy fingerling potatoes. Our minds and appetites are filled with the not-too-distant memories of crisp apples and wrinkled squash and we look forward to the future arrival of vibrant peas and syrupy strawberries. One flip through Susie Middleton’s new cookbook, “Fresh from the Farm: A Year of Recipes and Stories,”gets you in the mood for foods from any season.

Part cookbook, part memoir, “Fresh from the Farm” chronicles the adventures in farming and cooking that Ms. Middleton shares with her partner, Roy Riley, his daughter Libby, and their rescue black Lab named Farmer, as well as the parade of various critters and creatures along the way. The book is full of seasonal recipes highlighting fresh local food all year long and features breakfast items, soups, salads, veggie centric sides, hearty main dishes, and desserts.

This is the third book for Ms. Middleton, who moved to Martha’s Vineyard in January 2008 after living in Connecticut for 11 years and acting as editor-in-chief of Fine Cooking Magazine (she is now editor at large for the magazine). Ms. Middleton had previously visited the Island in the summer and fall, and when she decided to go on sabbatical she knew exactly where she wanted to be.

“Something just resonated with me, in terms of the natural beauty and peace of the Island,” she said. “I really don’t know why I came here in the middle of the winter, but I really needed to decompress. So I came here to relax and start writing.” Her first cookbook, “Fast, Fresh & Green,” dedicated to preparing vegetables using easy cooking techniques to develop complex flavors, was born that winter on the Island.

Like most wash-a-shores who decide to brave the offseason, Ms. Middleton was hooked; she had found a place to put down roots. She was introduced to farmers and people involved with the local food system on the Island. “I had this longing to connect better to the source of my food,” she said. “I got out here and was in awe of what people were doing to support local food.” And that’s when the transformation began.

First it was with a tiny vegetable garden, then she met a boy named Roy, actually a man, who is a builder and carpenter, and they decided to rent a plot at Native Earth Teaching Farm in Chilmark to use as a market garden. Next came a 19th century farmhouse, and a little farm stand built by Roy using salvaged materials. Fifty chickens arrived, and a bigger market garden was planted. Then came 200 laying hens, followed by 300 more, a hoop house, and tilled fields ready to be sown. Green Island Farm was open for business.

“The Fresh & Green Table,” Ms. Middleton’s second cookbook, moved vegetables to the center of the plate, making them the main attraction of the meal. In “Fresh from the Farm,” vegetables still play a starring role, but they are supported by meat and fish.

“Vegetables are so versatile and incredibly fun to cook with,” she said. “For me they are more creative than meat is. While I like meat, I think vegetables are beautiful, the colors, the textures, the flavors. I try to bring my enthusiasm for them and I try to create vegetable dishes that everybody is going to like.”

Ms. Middleton and Mr. Riley pride themselves on their award-winning blue ribbon green beans, cherry tomatoes, fingerling potatoes, lettuce and salad mixes, as well as baby bok choy, peas, and playful veggie varieties like fairy tale eggplant. And of course their eggs, which they sell at their farm stand 365 days a year, and which are also available at Up-Island Cronig’s.

“One day you wake up and your fantasy has become reality, and you are more surprised than anyone at what you’ve managed to pull off,” she writes in the introduction to “Fresh from the Farm.” Her journey and transition from writer and trained chef, to market gardener and then to farmer, is told in a story that borders the recipes and photos of the farm and her food, photos taken by herself and photographer Alexandra Grablewski. Cooks’ tips are scattered throughout the pages, teaching the reader how to boil eggs and what to substitute for ingredients they may not have on hand.

The 125 accessible recipes have been tested by a home cook as well as a professional chef, using both fresh vegetables off the farm and those found in the grocery store. The recipes feature food harvested from the farm, focusing on eggs, berries, and vegetables.

“My recipes are detailed but designed to work; people will want to cook them again,” Ms. Middleton said. “There are still some trademark-Susie really killer vegetable focused dishes, but it also has a really good meatloaf, French toast with berry syrup, a roasted tomato rustic tart, and all kinds of fun stuff.”

Deciding what to write for the book was easy. “I think cookbooks have to be personal, there has to be something really close to your heart, that you’re either living or doing well that’s different,” she said. “We’re living this incredible story, creating this small farm out of nothing, having a total blast doing it — and it’s becoming our lives.”

Ms. Middleton will speak about her new cookbook on Saturday, Feb. 15, at 3 pm at the Bunch of Grapes Bookstore in Vineyard Haven. Enjoy an author’s talk, cooking demonstration, drinks, and a tasting of recipes from her cookbook.

Green Island Farm is located down a dirt road directly across from the new Ag Hall on State Road in West Tisbury. Look for the chalkboard sign. The farm stand is open seven days a week from 8 am to 7 pm.

Favorite recipes from “Fresh from the Farm”: The farmhouse French toast with backyard berry syrup. It means a lot to me that every Sunday Libby asks for that and we sit at our little table in our tight kitchen after chores and eat it. It’s family time, I love the fact that I’m able to make recipes that Libby asks for and enjoys and that we get to share at the table together as a family.

A little more complicated but also really delicious is the Summer Veggie-Palooza Paella. A good friend of mine is married to a Spaniard, and she taught me to make authentic paella. It’s so fun and so delicious. She came up to the farm with her kids and made it and Roy fell in love with it. I decided for the book to honor that great memory, of Sarah making it for us and plunking it down in the middle of the table and everyone sharing from the pan which is the tradition with paella.

Favorite ingredient: Other than garlic, fresh ginger, and lemon and lime zest for perking up a vegetable dish. I’m really big on using a little acid on most vegetables, caramelizing them and hitting them with vinegar or lemon juice. It’s the sweet tart thing.

Favorite kitchen tool: Circulon non-stick stir frying pan. It has a bowl shape with surface area that can brown and steam at the same time. If you cut vegetables small, you can make delicious dishes quickly with only a little oil and high heat. It’s good for grain dishes like fried rice. I also love my Kyocera ceramic knife.

Favorite cookbook: I grew up on “The Joy of Cooking” and “The Silver Palate Cookbook,” but I love British cookbooks right now, they are doing really cool things with vegetables. “River Cottage Veg” by Hugh Fearnley-Whittingstall, “Tender” by Nigel Slater, and “Plenty”by Yotam Ottolenghi are a few favorites.

This easy and delicious side dish is a great way to introduce people to roasted beets — or beets in general. You’ll love it, too, because the small-diced beets cook in only 25 minutes — no boiling or long, slow roasting here. This is also the kind of dish that’s as nice in winter as it is in summer. If you can find golden beets, use a mix of colors here. Or you can also substitute carrots for half of the beets.

Recipe copyright Susie Middleton, 2014, from Fresh From the Farm: A Year of Recipes and Stories (The Taunton Press)

Heat the oven to 450°F. Cover two heavy-duty sheet pans with parchment paper. Keeping the red and golden beets separate (if using both colors), cut them into medium-small dice (no more than about ½ inch). Put each color in a bowl and toss with 2 teaspoons olive oil and 1/2 teaspoon kosher salt. Transfer each bowl of beets to separate sheet pans and spread in one layer. Roast until the veggies are tender and shrunken, about 25 minutes. Transfer to a mixing bowl.

Put the orange juice, raspberry jam, and balsamic vinegar in a small saucepan over medium heat. Stir or whisk continuously until the jam is completely melted and the sauce is slightly more viscous (it may be steaming, but it should not boil), about 2 to 4 minutes. Remove the pan from the heat and immediately add the cold butter. Swirl the pan until the butter is melted and the sauce is slightly creamy. Add the cranberries and thyme and stir. Pour and scrape the balsamic butter with the cranberries over the roasted beets and mix and toss gently. Add most of the pecans and stir gently again. Transfer to a serving bowl and garnish with the remaining nuts and herb leaves (if using). 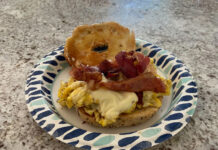 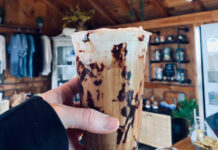