The Martha’s Vineyard Regional High School (MVRHS) school committee voted Monday night to accept the resignation of principal Stephen Nixon, effective at the end of the school year. Superintendent of schools James Weiss announced the resignation on April 28 after he had granted Mr. Nixon, principal since 2008, a leave of absence for health reasons.

Mr. Weiss said he appointed Assistant Superintendent Matthew D’Andrea as acting principal on April 29, the day he received Mr. Nixon’s resignation letter. Mr. Weiss said the goal is for Mr. D’Andrea to fill the job until a new principal is hired, working four days a week at the high school and one at the superintendent’s office.

Mr. Weiss said he mapped out a relatively quick process, and he gave the committee a copy of a principal search timeline. The job is already posted on SchoolSpring.com, an online site for teaching and school jobs. Mr. Weiss said his goal is to select a search committee of 8 to 12 people, including school committee members, administrators, teachers, parents, students, and community and organization members, by May 12. The position posting will close on May 21, the committee will review applications and select interviewees by May 27, and begin initial interviews the week of June 2.

In other business, the committee heard a proposal from Kimberly Burke and Herb Kiehn of the Oak Bluffs Finance and Advisory Committee about using a three-year enrollment average for towns to determine their high school assessments. The committee voted to table the topic in order to get more financial information.

The school committee also voted to approve second readings on policies regarding student absences and excuses and student conduct and discipline. The committee scheduled its next meeting for June 2 and final meeting of the school year on June 23, both at 7 pm. 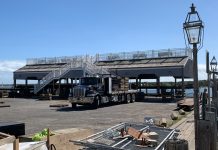