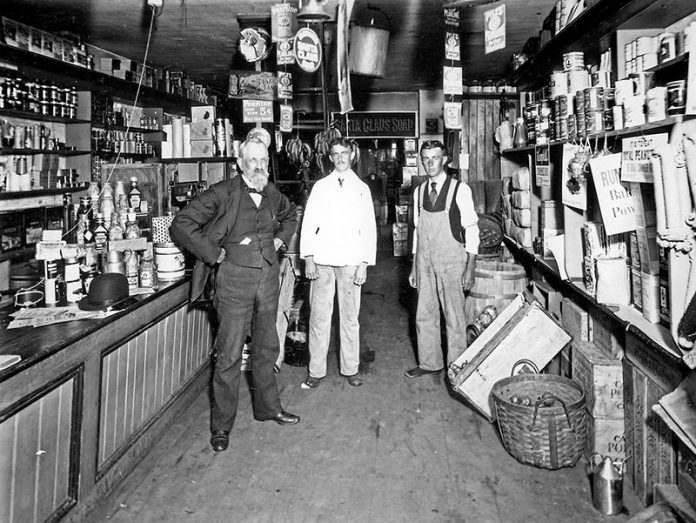 The Holmes Smith grocery store, photographed here about 1905, occupied the building on the corner of Main and North Water streets in Edgartown, where the Edgartown Paper Store is today.

Holmes Smith, the bearded gentleman visible on the left, was one of nine children of Capt. Holmes W. Smith Sr. of Edgartown, co-founder of the New Bedford and Martha’s Vineyard Steamboat Company and captain of Edgartown’s first locally-owned paddlewheel steamer, the Naushon. While Holmes Jr. had a brief maritime career in the 1850s as a whaler, he quickly found his calling as an Edgartown merchant. He maintained his grocery store in Edgartown for more than 40 years. Albion Waight, one of the clerks visible on the right, later became an Edgartown carpenter.

A close examination of the photo reveals many familiar (if not necessarily local) grocery items — coconut, peanuts and bananas — as well as some familiar logos and brand names like Campbell’s soup, Quaker oats, Heinz condiments, and Rumford baking powder.