Although last winter was particularly severe both in its cold and snow cover, many Vineyarders complained early this summer that there were more ticks than ever. This is intriguing because the proliferation of these pests in earlier years was often ascribed to relatively mild winters. There may be other examples of such dubious assumptions, which have led to flawed proposals for controlling ticks.

The apparent contradiction of received wisdom about the arachnids reminded me of a campaign last year to reduce their number by slashing the Vineyard’s deer population (MV Times,  Aug. 29, 2013, “Sam Telford from Tufts talks tough on ticks”; Vineyard Gazette, Jan. 31, 2013). Although the main advocate for drastically reducing or extirpating deer, Sam Telford, has made a strong argument for re-approving the vaccine against the disease, which became yet another victim of our litigious culture when it was withdrawn from the market after lawsuits, my experience suggests that his direct linkage between the number of deer and cases of Lyme disease is weaker, and is based on a failure to compare different eco-systems.

Here’s the current doctrine: the main vector for Lyme disease is deer ticks — that much is certainly true — as Mr. Telford says, up to 94 percent of female ticks have fed on deer. This is where I become suspicious for a couple of reasons. First, because of the words “up to,” which indicate that there is a range. The second is because the specific numbers of both ticks and deer in such diverse environments as wetland forests and grasslands, and most importantly the ratio between them, is essential to understanding the true significance of any numbers, and the factors behind them. Ninety-four percent of 100 ticks per acre with two deer would be utterly different, to take an extreme example, in its impact on humans, than 94 percent of 10,000 ticks per acre with one deer.

My reasons for suspecting that Mr. Telford’s conclusions are based on an incomplete analysis are founded on decades of life outdoors on the Vineyard. Here’s what I’ve noticed. When my family and I walk along mown paths in oak forests between Menemsha and the Brickyard in June and July, we almost invariably pick up a few deer ticks, despite the fact that we can see for considerable distances under the trees, and deer are usually absent or sparse. But after 20 years and tens of thousands of hours of yard work and thrashing through brush in a sassafras, beech, maple and tupelo (Beetlebung) forest in Aquinnah during the same months, we have yet to pick up a single tick, although deer are visible all day long in an area with far more places to hide.

Mr. Telford might be tempted to respond that these observations are just the anecdotal experiences of one man and his family, but I’d suggest that the difference has been too great and consistent over decades to be easily dismissed. It would be wiser to find the reasons behind the observations than to dismiss them. Here’s my hypothesis.

The abundance of deer and near absence of ticks in Aquinnah’s lush wetland forest, and abundance of ticks despite a lower number of deer in Chilmark’s dry oak forest suggest that the differences go deeper than the relationship between deer and their parasites. In fact, it suggests that it has something to do with the types of forest. One of the chief differences between them is that oak forests produce more starch in the form of acorns that squirrels can hoard, leaving plenty for other rodents such as white-footed mice, which serve as the hosts for immature deer ticks. The mice are a crucial carrier of the ticks, which thrive, even when there aren’t many deer, if the rodents are plentiful.

The evidence from our forest in Aquinnah also suggests that the contrary is true — that the ticks nearly disappear when there are plenty of deer, but few mice. This difference has been so flagrant in my experience that I think the common term for Ixodes scapularis, “deer tick”, is a misnomer, which misdirects attention towards the wrong animal, just because it is a bigger and more obvious target. The ticks should probably be renamed the “white-footed mouse tick,” “oak tick,” or “acorn tick.”

This brings me to the question of good versus bad solutions. Mr. Telford “makes no bones that his primary short-term objective is to significantly reduce the deer population on the Island” by killing them. Perhaps he should watch a TED talk by Alan Savory in which Mr. Savory says that his greatest regret is that he told African governments to cull ten of thousands of elephants in order to manage their reserves, causing the extermination of 40,000 elephants, although his analysis turned out to be backwards.

There are two better ways to reduce the number of Ixodes scapularis on the Island than unleashing a shooting-fest, one of which is so well-known that I was surprised that Mr. Telford did not mention it. It involves the use of tickicide-treated rollers at passive feeding stations for white-tailed deer. According to Cornell University, study after study (Carroll et al 2002, Pound et al 2000, Pound et al 2000b, Solberg et al 2003) has shown large reductions in tick populations following the use of such devices.

Another entirely compatible solution would be to favor vegetation that does not produce surplus starch for mice. I imagine that this solution would be preferable to people who would rather see a few trees removed from their views, than the disappearance of deer, which provide the countryside with much of its charm.

If I were a hunter, and I am indirectly, in the sense that I have allowed specific hunters to hunt on my land, I would also be opposed to Mr. Telford’s plan, since it would result in the rapid reduction of the very deer hunters enjoy stalking. It might be fun at first, but would end up destroying a pastime that many people enjoy.

One thing I agree on with Mr. Telford is that the problem of Lyme disease and other tick-borne diseases is huge and must be addressed. The question is simply, how? The answer is probably to attack the problem in several ways at once. One way is to continue encouraging sustainable hunting, since it plays a positive role in maintaining the Island’s ecological balance. Another way that should be implemented simultaneously is to install feeding stations or salt licks with tickicide-treated rollers in oak forests and other infested environments. A third one is to favor vegetation that does not encourage the proliferation of mice and their ticks. The fourth way, which Mr. Telford and I agree on whole-heartedly, is to push for the re-approval or improvement of the vaccine.

In the meantime, we should be wary of listening to any calls to manage nature through destructive intervention or violence, since such approaches have caused enormous unintended consequences in the past.

Duncan Caldwell is a Fellow at theMarine and Paleobiological Research Institute of Vineyard Haven and a Lecturer in prehistory, Doctoral module, Muséum National d’Histoire Naturelle, Paris. 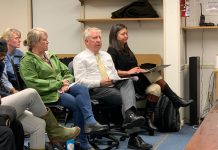