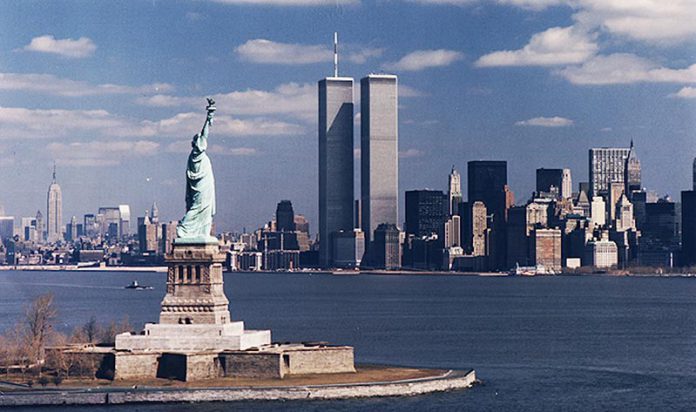 Heavy exterior glass panels and wall sections fell away, making dead drops, straight down like stones. The air handling system, sheet metal ducts and plenums were sucked out and fell slower, seesawing to the ground.

The fire within the interior spaces caused updrafts, downdrafts and backdrafts that moved the billowing smoke in satanic harmonies. Flames heightened and stretched into the Tower’s higher floors. Standing on Liberty Plaza, I was under the World Trade Center (WTC) buildings when tens of thousands of pages of paperwork exploded from the voids in the shell. Carried on thermals created by the red-hot glowing structure, the Tower, acting as a gigantic chimney, roiled papers through the lower floors and ejected them, venturi-like, 1,000 feet above the ground. Each page was succinctly visible as a single sheet, not forced downward by gravity but instead flying out and upward, rising to a point where the hot ejection mixed with crisp morning air. The sun-glistening sheets floated parallel to the horizon, cooled and then rolled, individually, perfectly, in slow motion, beyond sight. The papers flickered brilliantly like mirrored reflectors playing off sprays of sunlight against the brilliant blue sky. Back and forth, for an instant into and then out of the smoke, to its edge and again into the day’s brightness like illuminated wedding confetti catching a gentle breeze playing in and out of a darkened cathedral foyer.

As a speed-reader absorbs a chapter a second, I surveyed surrounding buildings, roadways, and intersections. The cause of the instantaneous and enormous destruction was inconceivable. I relived the past few minutes hoping for a clue: an explosion, a bomb, maybe a missile; crackle of gunfire; the World Trade Center aflame and smoking; missilized debris perforating the skin of 200 Liberty and the adjoining Airwalk. Unbelievable. The power of the moment paralyzed me. Dumbfounded, my feet stuck to the pavement. Terror reigned supreme, yet the scene was fiendishly inebriating. My gaze fixed on the Tower, then slowly, lower, to survey the ground nearby. The pavement was peppered with flying glass and building materials.

To my rear, commuters, worker bees, rounded the corner from West Street, the protected side of World Financial. Earbudded, Starbucks in hand, they were oblivious to the real-time fantastic calamity above them. Narrowly missing certain death by a few minutes, unaware, they walked into the path of destruction. One by one they saw the carnage, took charge of their senses, and wisely retreated.

As I looked west down Liberty, hundreds of shoes littered the ground, sneakers, and a singed bedroom slipper … loafers, dress black loafers, one shoe, another with a foot still in it. Shards of glass were everywhere. On the sidewalk, not 40 feet away, rested the crumbled-paper shape of Flight 11’s shiny metal engine.

Debris of all types and descriptions, concrete, façade metal, mullions, and glass, rained down. It landed everywhere. A bright aluminum-sided delivery truck was half-flattened by a fallen wall section. Each piece of street furniture that, seconds ago, was part of the normal Tuesday-morning street scene became motionless. Some part of every vehicle, taxis, limos, delivery trucks, and coffee vendors, was damaged by rubble, building materials, and wall slabs the size of conference tables. I wouldn’t know for 30 minutes that a 100-ton Boeing 767 carrying 10,000 gallons of jet fuel and 92 people, running at 466 miles an hour, 700 feet overhead, hit an immovable object. What I did know was Liberty Street was a war zone.

On a perfect September morning, deep blue sky filled with clean fresh air, the city was disintegrating before my eyes. The Tower was crippled, hollowed, and consumed by fire and smoke. Glistening cadmium red flames took on the appearance of blood in deep gaping wounds.

As I looked straight up the façade, a man jumped from the Tower. White shirt, black pants, end-over-end he tumbled to the ground. “Oh no.” “Oh, my God,” muffled voices rippled through the small crowd gathered around me. At that instant, the inert towering glass and metal mass became human. I nearly went into shock. The Tower, partially blown away, was irreparably damaged and in the process of structural failure, but for all its scars, the gaping hole in its skin, fire, smoke, and fury, the building was, after all, a building. The very instant the first man jumped out, it breathed, and it became human. Shock and disbelief were now layered with another different, more powerful, reality of impending deaths. The Tower was important because the people inside made it so, and there were lots of people inside. For the first few minutes, this was a building damaged by a bomb. Now it became humanity being ripped apart from the inside out.

After the first man jumped, my attention focused on hundreds of the Tower’s prisoners, mostly white-shirted, standing against the Tower’s windows and in the voids where the windows had melted away. Their fate was sealed. From my complete vertical panorama a mere 200 yards away, their shapes and simple movements were seen easily. Because they were trapped inside, the skyscraper was alive as surely as you are while reading this. Here, a building representing humanity’s fantastic construction, manifesting its mechanical ingenuity and artistic genius, entraps its very creators. A moment earlier, an airplane, no less ingenious, became the devil’s tool that a foul version of mankind used to devastate two of the most important city blocks in the world and prematurely deliver into eternity 2,754 innocents.

Standing below, I was overcome by utter helplessness. The distant figures blocked in the Tower’s upper floors were cut off, and could not be helped then or in the 56 minutes prior to the structure’s implosion.

One by one and two at a time, men and women jumped from the Tower’s blown-out shell. Unable to act, I became overwhelmed with an obligation to witness the poor souls jump to their death; watching was the only thing I could do, it was the least I could, and, in the same breath, it was all that I could do. The final desperate acts of faceless, nameless shapes will never be forgotten.

A man held onto the outer wall, bending himself to the façade, holding for a few seconds until the flames and heat intensified. He mercifully let go. Another man seemed to get a running jump, and appeared to fly out by leaping what might have been 20 feet or more, so that his silhouette was fixed against a blue sky far away from the building’s exterior. My heart ached, yet certain their freefalls were swift and final. Some dropped spread eagle, some like gliders, others cartwheeled over and over. Some fell erect and stiff, a few dove headfirst. From my angle, two dozen people leaped. Each plunge brought a groan from my small gathering of maybe 10 people. Each groan from the few who dared look up triggered screams and wails from others in the clutch wearing the brown uniforms of WTC employees. Shielding their heads from falling debris with sweaters and handbags, they successfully made the run from the WTC on the opposite corner to this spot in front of 200 Liberty moments earlier. Tears filled our eyes while the scene was repeated over and over again. A half dozen, maybe a dozen, maybe more, leapt from my side of the Tower. Stunned cold, I couldn’t bear any more of the unfolding horror. On the rest on the ground, men and women fainted; others were frozen stiff with dreadful fascination. The fast-unfolding events brought me to the limit. I had to leave. I stood, setting off toward the Boat Basin. My knees became weak with the first steps, my head light and dizzy from looking up for so long. I squatted, sitting on my briefcase for a moment to collect myself.

Resting on steps 20 feet to my left sat two men and a uniformed fellow, a park ranger of some type. A third of one man’s head was melted-away candle wax, and he bled from a gash above his right ear. A second man was wearing what appeared to be a Hawaiian shirt, until I realized that it was his flesh, muscle, bone, and blood that made up the gruesome colors of the print — he had no shirt. The ranger could do nothing but sit with these two and wait for the responders. I stood a second time to leave. As I turned toward the river, a phenomenal ear-piercing roar of jet engines attacked my eardrums from all directions of the compass, ricocheting off the glass, concrete, and asphalt canyons surrounding me. A powerful concussion nearly knocked me to the ground. A total immersion of sound … my bones vibrated, my clothes bounced off my skin. United Flight 175 arrived overhead and exploded into the South Tower. Then all was quiet.

For most of the summer, Newton residents Victor Colantonio and his wife Dawn live in the shadow of Cape Poge Light on the northeast corner of Chappaquiddick, where Victor, an avid fisherman, is never a cast away from the ocean.

On Sept. 10, 2001, Mr. Colantonio, a telecommunications entrepreneur, traveled from Chappy to New York City to advance a large business deal. Tuesday morning, Sept. 11, he was at the World Financial Center at 200 Liberty Street, in the shadow of the World Trade Center Towers, when al-Qaeda terrorists launched the first of four coordinated attacks in hijacked commercial airplanes against the United States, two of which targeted New York City.

Mr. Colantonio’s essay describes the moment from the time the first plane struck to the moment the second plane arrived. It is part of a 15,000-word account he completed as part of the therapy that helped him recover from that tragic day.

Mr. Colantonio, who is not a writer, submitted his entire firsthand account in response to a call from the 9/11 Memorial and Museum for recollections of that day.

The essay above, an excerpt from the full account, won first prize in the 2013 Howard/John H. Reid Short Story Contest, sponsored by Winning Writers, a website devoted to literary arts.

“What he describes is absolutely mind-shattering. As a piece of straightforward reportage, ‘Journal Entry, September 11, 2001’, has no equal,” the judges said in their comments.

Mr. Colantonio donated his $3,000 prize to the Newton and the Nantucket Boys & Girls Clubs to sponsor an essay contest with an annual $100 cash prize. His companion in survival that day was from Nantucket.

At the 9/11 Memorial in New York City, the following sentence from his story appears on the wall at the entry to the room that memorializes the 2,754 people that died that day: “While we still looked up, a man jumped from the building to the ground … At that instant, the towering glass and metal mass of billowing smoke became human.”

RIP, City Upon a Hill

I got vaccinated this week, and here is what I learned

Not for nothin’, but you heard it here first