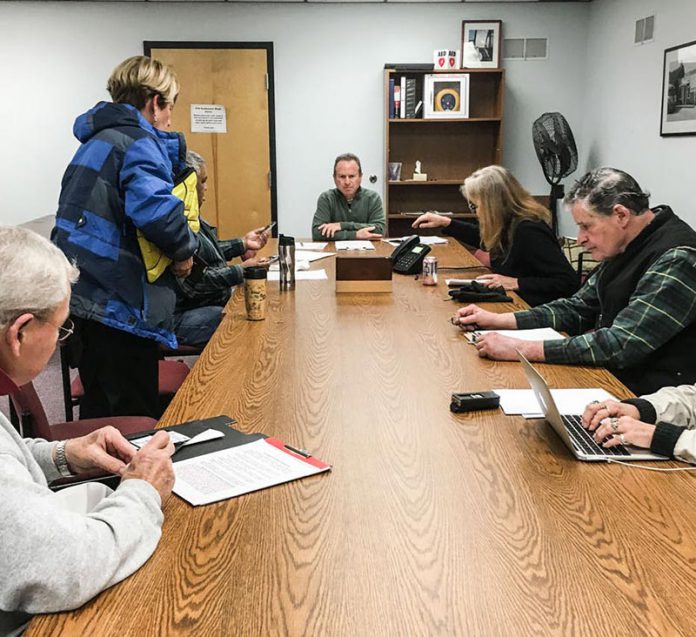 The Martha’s Vineyard Airport Commission met Wednesday morning. After an hour and a half in executive session, the commission reconvened in open session. Commission chairman Myron Garfinkle said the commission had reached a negotiated settlement with airport manager Sean Flynn, and provided a short statement for the press.

“The Martha’s Vineyard Airport Commission and Mr. Flynn have reached a mutually negotiated agreement concerning his employment with the commission,” the statement said. “Mr. Flynn has resigned from his position as airport manager in order to pursue other professional and personal interests. The commission looks forward to focusing on the business at hand to continue to provide the traveling public with a safe, efficient, and enjoyable experience, and acknowledges Mr. Flynn for his 22 years of service to the airport.”

Further, the statement said the commission is beginning the search process for a new airport manager, and that the commission is excited about building a new Aircraft Rescue and Firefighting facility and snow-removal-equipment storage building.

“We are pleased that we enjoy a cooperative working relationship with both the FAA and the MassDOT,” the statement said.

It also stated that the commission looks forward to working with the revitalized Airport Business Park Tenants’ Association, the new Experimental Aircraft Association, the IMC Club Chapter leadership, and sharing the master plan with the Vineyard community.

“With our vision focused firmly toward the future, your Martha’s Vineyard Airport Commission is challenged and excited by the opportunities we face,” the statement concluded.

Wednesday morning, Mr. Garfinkle would not answer questions regarding the terms of Mr. Flynn’s resignation. Mr. Flynn and Mr. Beach could not be reached for comment Wednesday.

Wednesday afternoon, assistant airport manager Deborah Potter provided The Times with the settlement agreement and release. In the release, signed on Nov. 27 by Mr. Flynn, it said his separation from employment is effective as of Nov. 4. It stipulated that he has until Dec. 4 to revoke his acceptance of the agreement. His formal resignation will be effective after that, on Dec. 5.

The release said Mr. Flynn will be paid his earned time, worth $50,015, in addition to severance in the amount of $185,684. Part of the agreement between Mr. Flynn and the commission is a covenant not to sue, in which Mr. Flynn releases all rights to pursue legal action against the committee, the Dukes County Commission, Dukes County Manager, or Dukes County Treasurer. The same applies vice-versa; the commission agrees not to sue Mr. Flynn.

The agreement also stipulated that Mr. Flynn and the commission will abide by the statement provided by Mr. Garfinkle Wednesday morning, and that Mr. Flynn “will not make any statements or induce anyone to make statements that are professionally or personally disparaging about the Commission.”

The agreement specifically outlined that it is not intended, and should not be construed, as an admission by the commission, and said, “The Commission specifically denies that it has engaged in any wrongful or unlawful act with respect to Mr. Flynn, his employment, or termination thereof,” or violated any state or federal rules or laws.

The same applied to Mr. Flynn. “Mr. Flynn specifically denies that he has engaged in any unreasonable, improper, or wrongful act or omission in connection with his work as Airport Manager or his management of the Airport; specifically denies that he has breached his employment agreement with the Commission” or violated any laws or rules with respect to his employment or management of the airport.

In September, in a special closed-door meeting, the commissioners voted to place Mr. Flynn on paid administrative leave. The vote followed behind-the-scenes, and ultimately unsuccessful, efforts by Mr. Garfinkle to craft a separation agreement with Mr. Flynn. The negotiations began following an annual FAA inspection in May that highlighted a long-overdue aircraft rescue and firefighting (ARFF) building construction project, the lack of a wildlife management plan, and inadequate runway markings that prompted what Mr. Garfinkle said was a FAA letter of investigation.

At that time, Mr. Flynn said efforts to oust him were the outgrowth of the long and debilitating battle between the Dukes County Commission and its appointed Airport Commission, and violated the terms of his contract. He promised a costly legal battle if there were no resolution.

The September vote formalized Mr. Flynn’s status, which had been unclear for more than seven weeks. Assistant airport manager Deborah Potter took on the airport manager duties in the interim.

Mr. Flynn first became airport manager in 2005. He was in the fifth month of a new three-year contract that took effect July 1, which paid him $138,882 annually.

This story was updated at 3:07 pm Dec. 2 with additional reporting.