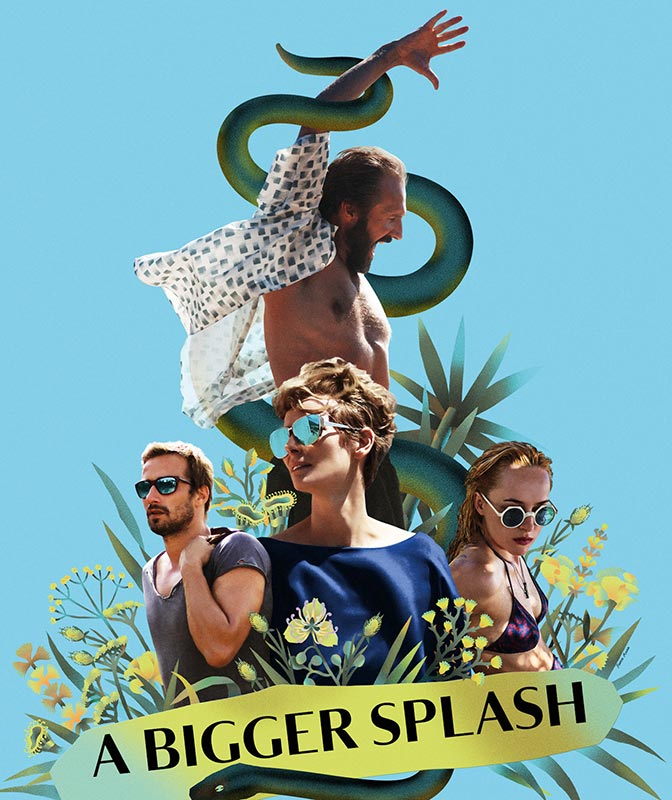 The movie’s title comes from painter David Hockney’s 1967 painting of an eloquently pared-down L.A. retreat. Swinton plays rock superstar Marianne, and the film opens as she emerges onstage in a silver-sequined pantsuit to face thousands of adoring fans. The scene quickly shifts to a villa on Pantelleria, a picturesque Mediterranean island between Sicily and Tunisia. Marianne is recuperating there from throat surgery with her lover Paul (Schoenerts), basking nude and enjoying sex in a flood of sunshine. The surgery has rendered her temporarily voiceless, and Swinton has never been a more evocative mix of statuesque beauty and androgynous features.

Clouds threaten the couple’s Pantelleria paradise with the arrival of Marianne’s former lover and producer, Harry, played in a tour de force of manic energy by Ralph Fiennes. Harry crashes Marianne and Paul’s retreat with his newly discovered and Lolita-like daughter Penelope (Johnson). He practically does cartwheels in his attempts to win back Marianne’s affections. Italian director Luca Guadagnino makes this exquisite world of the rich and famous seem tasty as marzipan. There are quick trips to an Italian household for a taste of homemade risotto, nights spent at a karaoke club mouthing the Stones’ song “Emotional Rescue,” swimming races between Harry and Paul in the villa’s pool.

Tension builds in this sexual merry-go-round with few boundaries. Harry competes with Paul for Marianne’s attention, even though they are friends and he introduced Paul to Marianne. Penelope sets her provocative eyes on Paul. A blatantly symbolic snake slithers around the villa pool. A sirocco from North Africa starts to blow. The background for most of the action is the stunningly beautiful island with its volcanic rock, blue skies, and Mediterranean seas. As “A Bigger Splash” hurtles towards its conclusion, a group of refugees shows up.

Director Guadagnino’s approach tends to be heavy-handed, from Marianne’s Dior wardrobe and Penelope’s come-hither glances to Harry’s frenetic, often nude cavorting, and the shallow references to the immigration crisis. But the scenery is as gorgeous as the actors, and “A Bigger Splash” is an entertaining visit to a world where the pleasures of our materialistic society reign.

For screening times and tickets for these and other current films, visit mvfilmsociety.com, entertainmentcinemas.com/locations/Edgartown, or go to MV Times event listings.