As the most recently departed generation of Islanders would have told us, there were no deer on Martha’s Vineyard.

“There wasn’t any then,” declared Fanny Jenkinson (1893–1994) of Chilmark to Linsey Lee of the Martha’s Vineyard Museum in 1983. “Never heard of a deer.” Basil Welch of Vineyard Haven told Lee, “I was born and brought up in the Depression, so everything we shot, we ate. There were no deer on the Island at the time, but there were plenty of ducks.”

Deer lived on the Island for thousands of years. Until they didn’t.

Archaeologist William Ritchie found evidence at Squibnocket of an indigenous people whose diet as early as about 2270 B.C. “depended heavily on the white-tailed deer.” Venison served as the principal meat source for the ancestors of the Wampanoag. Archaeologists have found strong evidence for this at sites across the Island, spanning four millennia.

Benjamin Bassett of Chilmark told author Jeremy Belknap in 1881, “About the year 1720, the last deer was seen on the Vineyard and shot at.” Thus ended more than 4,000 years of our Island as a cervine abode, less than 80 years after the first Englishmen settled here. If there are any records of a wild deer on Martha’s Vineyard over the next 200-odd years, I haven’t seen them.

Writer James Freeman made this curious inventory in 1807: “Beside domestick animals, the quadrupeds which are found on Martha’s Vineyard are these which follow: the skunk; the musquash; the mink; … ground mice; the mole; the rabbit. … There are no deer, foxes, nor squirrels.”

Most late 19th and early 20th century references to Island deer try only to make an argument, to an apparently skeptical audience, that deer once might have lived here. Charles Banks, in his 1911 book, “The History of Martha’s Vineyard” speculated about Brereton’s 1602 report, “their habitat on the Island is not improbable.” He laments, “The wild animals of the Vineyard have practically disappeared, and the formidable list of Brereton contains only two which can be said to exist today, the fox and rabbit.” No deer. From the 1700s on, Vineyarders were bird hunters — duck and geese and heath hen.

Meanwhile, on neighboring Naushon, also depleted of the native deer, colonial owners James Bowdoin (later second governor of Massachusetts) and his brother William “stocked it with deer that they might have a park after the manner of the nobility of England,” according to Banks, together with moose and turkey. In 1765 Bowdoin passed a law protecting the animals from visiting poachers, “An Act for the Preservation and Increase of Moose and Deer, on Tarpolin-Cove Island.” Naushon became a protected haven for deer in Massachusetts.

We tried something similar in the 1930s, when the Martha’s Vineyard Rod and Gun Club brought about 15 fallow deer over from Lake View Park in Worcester. A European species, quite distinct from the original white-tailed deer, the fallows were released on the Island for the sport of local hunters. The herd reportedly numbered some 150 animals by 1962, but evidently vanished before 1970. (Or was it 1990? Nobody’s quite sure.)

But what about the white-tailed deer? Local wildlife experts are hesitant to conclude that this species had ever been completely extirpated from the Vineyard. The fact is, deer swim. And, as author Nelson Sigelman writes, “Deer are incredibly adept at staying out of sight.”

Even today there are rare but periodic sightings of deer swimming to the Vineyard from Naushon, when food gets low, when yearlings search for new territory, or when hunters drive them into the water. In 1836, Capt. Luce of the sloop Neptune, bound for Holmes Hole, found one swimming across Buzzards Bay toward Naushon, then three miles distant. Feeling pity on it, he rescued the animal and brought it to the Vineyard under his care. A similar tale is reportedly responsible for the return of Nantucket’s extirpated deer. But as far as we know, Capt. Luce’s buck did not reproduce.

In the early 1800s, when some 15,000 sheep shared the Island with 3,000 humans, the Island was mostly void of trees, a poor habitat for wild white-tailed deer. Allen Keith wrote in his 1969 booklet, “The Mammals of Martha’s Vineyard,” “Occasionally some swam over from the Elizabeth Islands, but these were usually hunted down quickly because there was little cover for them.”

Local experts disagree on whether a breeding population, however small, existed on the Island during the 1700s and 1800s. Biologist Dick Johnson writes, “I find it hard to imagine killing every deer on Island, although it may have been possible when it was all sheep pasture and few places for them to hide.”

Biologist Luanne Johnson adds, “I would assume there was a constant stream of immigrants from the Elizabeth Islands, and that the deer were never extirpated. No population of [Vineyard] deer is isolated, genetically, nor has it been. They would have colonized regularly,” Johnson continues, “on at least two occasions, I have seen groups of two or three deer swim ashore along the south shore. If deer were on the Cape and Elizabeth Islands, they would have also made it to the Vineyard.”

And so they did, definitely by the 1940s. Nobody knows exactly when, but a self-sustaining white-tailed population returned all by itself. Keith wrote, “As heavier forest began to reappear on the Island, continued immigration of deer from the Elizabeth Islands made it possible for a breeding population to reestablish itself.” Today’s herd is probably all descended from the immigrants of that noble stock of James Bowdoin, master of Naushon and namesake of Bowdoin College.

In 1949, Martha’s Vineyard had its first official deer season. Twenty-seven deer were checked. In 1959, the Boston Globe ran the headline, “Too Many (!?) Deer at Martha’s Vineyard,” noting, “Natives have been complaining of deer raising havoc on farms.” You know the rest. At least they’re not moose. 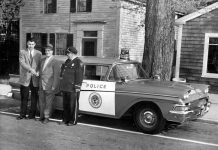 This Was Then: Chief King