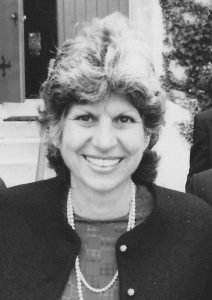 Helen was born and grew up on Martha’s Vineyard, and graduated from the Tisbury School. She attended the University of Massachusetts in Amherst, and graduated in 1953 with a degree in business administration. There she met her future husband, Robert Gelotte, also a graduate. She was an active member of Kappa Kappa Gamma sorority, and made and kept many firm friendships from that time. She was also in the Marine ROTC for part of her UMass years.

They married in 1957, and settled in Westwood, near Boston, where they raised three children. Summers were spent at her childhood home in Vineyard Haven, with family enjoying life near the ocean. Her husband Bobby died in 1984, and Helen moved back to Martha’s Vineyard. Her mother Sarah lived next door until she died in 2004. She loved her companion bichons, Daisy and Lilly. She worked a number of jobs on the Vineyard, as a bookstore clerk, doctor’s receptionist, and library assistant. She volunteered at the Martha’s Vineyard Museum, cataloging documents. She was treasurer of the Vineyard Haven Public Library renovation fund-raising committee during the early 2000s. She played golf and bridge. She enjoyed the company of close friends on and off the Island, old, new, and college friends. Summers and holiday family gatherings were a highlight for her, and a source of much joy and laughter.

Her final years were difficult, with loss of independence due to injury and illness, and she went to live with her son in Hatfield in 2016. She spent her final 2½ months at the Fisher Home, where she received the most loving and tender care imaginable from all the staff. She was often complimented on her big smile and thick shock of black and gray hair.

She leaves her two sons, Mark of Hatfield, and Matthew of Wellesley, daughter in-law Elizabeth Gelotte and son in-law John Peters, grandchildren Elizabeth, Anna, Nicholas, and Leigh, and dear cousin Marian Parsons of Bourne, as well as nieces, nephews, and other extended family. She was preceded in death by her husband Robert Gelotte, her father and mother, Manual and Sarah (Aruda) Viera, her sister Mary Delores, and her dearest daughter, Sarah Peters.

A funeral service will be held at the Hatfield Congregational Church, 41 Main St., Hatfield, at 11 am on Saturday, April 28, with a reception afterward in the church hall. A memorial gathering will be held on Martha’s Vineyard in the spring, at a time to be determined. Burial will be private.