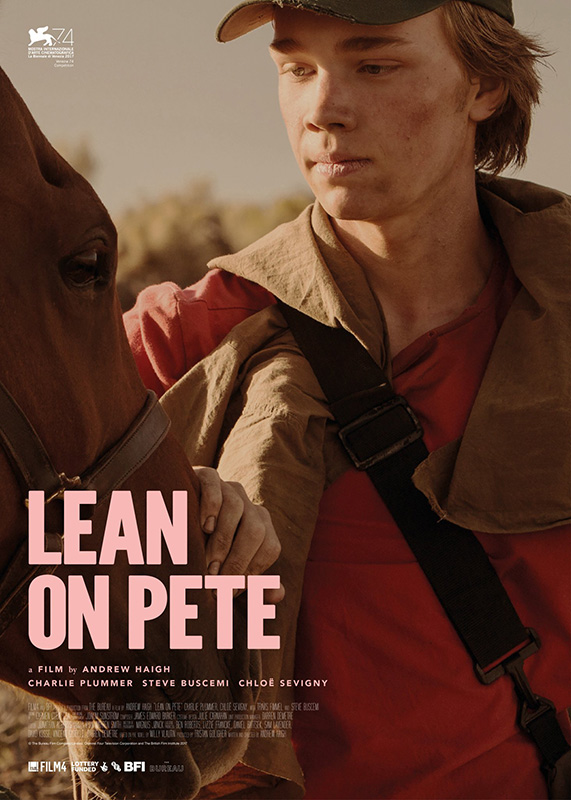 “Lean on Pete” is a moving tale about a teenager and the horse he falls in love with. It’s adapted from a novel by Willy Vlautin, and its director, Andrew Haigh, earned an Oscar nomination for “45 Years.” “Lean on Pete” opens this weekend at the Martha’s Vineyard Film Center.

Charley Thompson, played by Charlie Plummer, is a 15-year-old who lives with his single father, Ray (Travis Fimmel), on the edge of poverty. Viewers first see Charley out running. Haigh uses subtle touches, like Charley’s comment that cereal is in the fridge because of cockroaches, rather than hitting the viewer hard with melodrama.

Once Charley meets a curmudgeonly Del (Steve Buscemi) and jockey Bonnie (Chloë Sevigny), he starts working at the local (Portland, Ore.) racetrack. Charley’s happy to earn some money and buy food for himself and his father, but his world starts to fall apart after his father is attacked and ends up in the hospital. His companion becomes a quarter horse sprinter named Lean on Pete. When Charley learns Del is going to sell Pete, which means certain death for the horse, Charley drives away in Del’s truck and trailer with the horse.

With no money or food, Charley finds himself in one disastrous situation after another as he heads to Wyoming to find his aunt Margy (Alison Elliott). Once the truck breaks down, he walks through the desert with Pete. Shots of the landscape make a hauntingly beautiful contrast to Charley’s deteriorating circumstances. He talks to Pete as if the horse were human, and while looking for water for Pete, he lands with two suspiciously disreputable Army vets. At a restaurant along the route, he sits down for a big meal he can’t pay for. It won’t be the last time his actions are less than lawful.

Charley’s next encounter comes with a vagabond in a camper and his girlfriend. An attack by the man doesn’t end well, and Charley gets on his way again. At the end of the film, Charley is once again running, but his circumstances have changed. Plummer, who played J. Paul Getty III in “All the Money in the World,” carries the film with his sensitive, low-key performance. “Lean on Pete” is a powerful, if sorrow-filled, film about the low-rent world in the American West.

Information and tickets for “Lean on Pete” and other Film Center screenings are available at mvfilmsociety.com.