Monday evening, Edgartown selectmen opted to push implementation of a taxi metering pilot program until after the current summer season. After listening to a report from Edgartown IT manager Adam Darack, the board’s taxi liaison, and commentary from Michael Mszanski, vice president of Martha’s Vineyard Taxi, the board decided a trial run for a new meter app should not occur during the season.

Bluefish Taxi co-owner Jim Hickey acknowledged receiving the letter, but denied using his cabs for charter service. “We don’t do that. We never have. We never will,” he said.

“I’m disappointed,” selectman Arthur Smadbeck said. “Summertime is not the time to be instituting pilot programs.”

Mszanski told the selectmen Martha’s Vineyard Taxi worked through the year to develop the metering app. His company is down to one cab in Edgartown, due to what he alleged to be an unbalanced playing field.

He referred to competitors Adam Cab and Stagecoach Taxi as “criminal entities,” and said the companies are using their vehicles to run unlicensed charter services, “Which is how they boost their bottom lines and why they are able to support 12- to 15-passenger vans in the town of Edgartown, while we are down to one taxi,” he said.

Mszanski said an inspector from the state Department of Public Utilities (DPU) was on-Island investigating those taxi companies for charter carrier violations.

The commonwealth offered a different perspective:

“The DPU is not conducting an investigation on Martha’s Vineyard,” spokesman Katie

Gronendyke wrote in an email Tuesday. “Annually, around this time of year, the DPU inspectors are on Martha’s Vineyard conducting road tests and vehicle inspections for charter licenses.”

Asked later if his company was operating illegal charter services, Adam Cab owner Califfe Singh said, “No. All my business is above board.”

“I’m aware of the accusation, but I haven’t spoken to anybody from the state,” Melaney West, manager of Vineyard Crossings, the parent company of Stagecoach Taxi, said Tuesday.

West flatly denied any illegal activity. “It’s something that I’m really not comfortable talking about,” she said of the allegations raised by Mszanski. “I have a wonderful relationship with the town of Edgartown and the Edgartown Police Department. I don’t want to provide you with information that I am not clear about myself.”

Mszanski provided The Times with a cease and desist letter from DPU division counsel Jenna Cargill addressed to a redacted recipient. The letter demands the recipient halt “operations as an intrastate charter carrier within the commonwealth.”

Bluefish Taxi co-owner Jim Hickey acknowledged receiving the letter, but denied using his cabs for charter service. “We don’t do that. We never have. We never will,” he said.

Edgartown Police Chief Bruce McNamee told The Times he’s just getting up to speed on the charter carrier issue, and that he has been in contact with the DPU counsel. He pointed out a charter license, which is distinct from a taxi license, requires a “considerable insurance policy” and a safety inspection, among other things.

Squabble on Dock Street
“I had two employees quit Memorial Day weekend because they could not deal emotionally with the harassment from Adam Cab drivers,” Mszanski told the selectmen Monday night.

“That is ridiculous,” Singh later told The Times. “That is a lie.”

Grace Goodman, a cab driver for Adam Cab, later provided an alternate account. She said she was parked in one of two available spots on Dock Street over Memorial Day weekend while a Martha’s Vineyard Taxi was parked in the other. No other cab spots were available, she said, because bricks and equipment for sidewalk projects had been deposited in the remaining spots. She said Martha’s Vineyard Taxi president Morgan Reitzas approached her and asked her to vacate the spot because he wanted both spots for his cabs. She said she refused and threatened to call the police.

“He became very irate,” she said.

She called the police, and recalls they said both companies are licensed to operate in Edgartown, and suggested the cabbies work it out in a friendly manner.

Reitzas and Mszanski later offered a different account. They said Adam Cab took over both spaces with 15-passenger vans, and blocked their driver from entering. Mszanski said he placed a call to the county communications center, and a new Edgartown police officer “unfamiliar with the taxi regulation” eventually arrived. The officer was unable to resolve the problem, he said, and Martha’s Vineyard Taxi left the area, Mszanski said.

Darack pointed out to selectmen that the limited spaces due to sidewalk construction were “adding fuel to the fire” in regard to tensions between cab companies. He told The Times Tuesday he was informed by the highway superintendent that the brick and other materials should be gone in a week.

Mszanski said the state plans to contact town counsel on the charter matter.

The selectmen did not weigh in much further on the allegations leveled by Martha’s Vineyard Taxi.

Selectman Margaret Serpa suggested the board wait until town counsel has reviewed the issue.

Darack told the selectmen that after meeting with all three town taxi companies, he could not bring them to a consensus on the implementation of metering. “It’s hard to come up with a compromise when they don’t get along,” he said.

Darack also said while the technical aspects of the metering app were ready for implementation, the issue of how to handle multipassenger fares has yet to be satisfactorily addressed.

Town counsel Ron Rappaport saw no impediments to having a two-fare system, he said, but if Martha’s Vineyard Taxi were to utilize metering and the other two town companies opted not to, those companies felt it could cast them in an unfavorable light with the public, he said.

In regards to metering overall, he said Martha’s Vineyard Taxi’s two competitors were “being very vocal to me in their opposition …”

“Activating the meter thing now,” chairman Michael Donaroma said to Mszanski, “you think you’re ready to go with it; everybody else thinks it’s a bad time to start something like this.”

Mszanski was displeased, but accepted the board’s decision, and thanked the town for the effort it put in to date on taxi matters

In other business, Bad Martha’s Farmers Brewery owner Peter Rosbeck Jr. came before the selectmen to solidify an entertainment license. The selectmen admonished him for overcapacity service at the brewery, and for becoming “more and more like a bar than not a bar,” as Smadbeck put it.

Two neighbors voiced complaints about noise from the brewery. Rosbeck reminded the selectmen the brewery closes early — 6 pm — and noted he’s never made noise complaints about functions held at the Dr. Daniel Fisher House near where he lives in downtown Edgartown. He said those functions can be loud and run until 10 pm. In a 2-0 vote, the selectmen approved a license for Bad Martha’s for minimally amplified music twice a week from 3 to 6 pm. Chairman Donaroma recused himself from the vote and deliberation because the brewery rents property from his nursery. 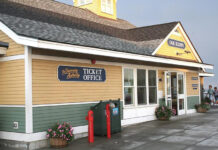