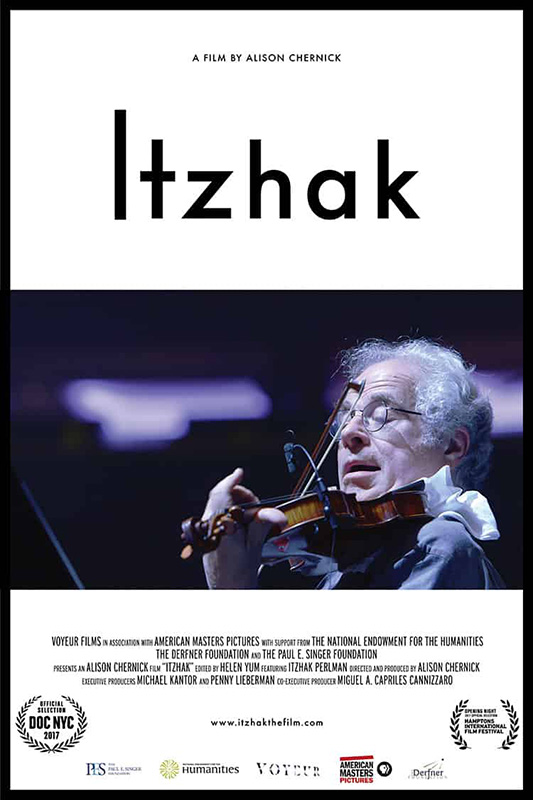 “Itzhak,” a documentary about Israeli-American violin virtuoso Itzhak Perlman, opens Friday, June 15, at the Martha’s Vineyard Film Center. Director Alison Chernick will attend and answer questions at the Friday afternoon and evening screenings, at 4 and 7:30 pm.

Chernick has directed documentaries on contemporary artists Jeff Koons and Matthew Barney, as well as one commissioned by the Tate Modern on Roy Lichtenstein. In a telephone interview, Chernick said she was connected to Perlman through a mutual friend.

“What do you know about classical music?” Perlman asked her.

“What do you know about filmmaking?” Chernick responded.

As the project went forward, Chernick said, Perlman was a delight to work with — a mensch, Yiddish for a person of integrity and honor.

Chernick filmed Perlman when he received the 2015 Presidential Medal of Freedom from Barack Obama, which inspired the filmmaker to begin working on the documentary in 2016. She used a cinema vérité technique, letting the camera follow Perlman in his daily life rather than relying on interviews and voiceovers, or a strictly chronological biopic approach. She said a lot of time was spent in the editing room.

Born in Tel Aviv in 1945, Perlman suffered from polio at age 4, and uses leg braces and crutches. His disability proved a challenge in his early years, but as the film progresses, ”Itzhak” makes it clear how little Perlman’s issues hindered his endeavours. Whether he’s playing violin at a Mets game or eating Chinese takeout with his family, Perlman’s effusive and gregarious personality shines through.

Chernick weaves archival footage of the musician’s childhood in Israel, as well as his early years in the U.S. In 1958, Perlman arrived in the U.S. at age 13 to study at the Juilliard School in New York. He performed on the “Ed Sullivan Show” that same year. He made his debut in Carnegie Hall in 1963, and won the Leventritt Award for pianists and violinists the next year. He has toured worldwide, and won multiple Grammy and Emmy Awards.

Throughout the film, the audience is treated to Perlman playing Richard Strauss, Johannes Brahms, Antonio Vivaldi, and Franz Schubert, along with the work of other classical composers. His wife Toby, who asked him to marry her when he was 17, shares stories about their life together.

Director Chernick has created a rich and enjoyable portrait of one of the world’s finest contemporary violinists, and Perlman returns the favor through his open and informative conversations in the film. “Itzhak” will screen on Friday, June 15, at 4 and 7:30 pm, again on Saturday, June 16, at 7:30 pm, on Wednesday, June 20, at 7:30 pm, and Sunday, June 24, at 1 pm, as part of the Film Center’s FILMUSIC Festival. The film has screened in 200 theaters, and will be broadcast on PBS’ “American Masters” series in October 2018.

Information and tickets for “Itzhak” and other Film Society or Capawock films are available at mvfilmsociety.com.

Take action to bring about change