It was a rainy day when I visited private chef and cookbook author Cathy Walthers at her home and garden in West Tisbury. Cathy has a teaching kitchen that seats 10, which is what you walk into, and on this rainy day, she’d just picked nettles and offered me some fresh tea. She’d dug up the nettles in Caitlin Jones’s garden at Mermaid Farm to transplant. Walthers tells me about nettles: “They have like 90 different health benefits. So I pour the hot water over it and then I eat the greens, because they’re good for you.” Arugula is also one of the first things to come up in any garden; she’d also picked rhubarb and made a rhubarb pie, instead of strawberries and rhubarb. “It was delicious,” she said. “I made a rhubarb simple syrup and I made a cocktail for my friends.”

Due to the rain we’re still in the kitchen, and Walthers shows me photos of her edible creations on the computer: “Recently I’ve been into the herbs — borage, cilantro — and I love edible flowers.” Walthers says she has enjoyed making drinks “look good with edible herbs, just petals of herbs.” In another photo she shows me a salad that she made special by adding borage leaves and a couple of calendula petals. “It takes an ordinary salad and makes it look colorful and beautiful,” she says.

Walthers, the oldest of four siblings, grew up in Medway, and gardened growing up alongside her mother. When she was 9 they moved to a property with enough room for a garden of their own. Walthers says, “I always loved being outdoors and having fresh food. We would go picking strawberries or peaches, blueberries, apples, and then we would make things. My mom was a big baker, and I was a baker growing up. I didn’t really get into cooking until later.”

Walthers explains, “I was laid off from my job at the Boston Herald. I have a master’s in journalism. I thought, well, I’ll take a year off — kind of like a midlife crisis in my 30s.” She went to New York City, lived with her grandmother, and enrolled in a yearlong degree program at the Natural Gourmet Institute in Chelsea. After getting her degree, she moved to the Vineyard, having heard that “private chefs were a thing,” and met her husband that summer. When it came time to plan their house, they got the garden going before the building.

Walthers says a couple of years ago, she put in a fuller herb and edible flower garden. Before planting the herb section, she visited herb gardens planted by master gardener Roxanne Capitan and Christa Fischer’s tea garden, and looked online. “I didn’t realize what it could offer me, “ she says. “Now the flowers are top of my list of what I use.” The first year of the herb garden, Walthers wrote down what she picked and what she made from it, and learned which herbs she uses the most. “I realized herbs took me to a new plane,” she says. “As a cook I had more to work with, more in a palette. You could use them for flavor or to make your dishes look beautiful.” Now that she has a sitting area in the center of her herb garden, she understands “what people mean about plants talking to you.”

She uses flowers frozen into ice cubes for herb lemonade and cocktails. Walthers dries the tea herbs, like lemon verbena and bergamot. She says, “The garden is totally connected to the Vineyard. I learned about garden compost from Roxanne. From Christa I learned about cutting and drying and mixing herbs for teas, like chamomile and mint. I have a ton of mint. I buy my plants from here, and they make me think of different people. I go to the plant swaps.” Walthers had just planted three kinds of strawberries from Fala Freeman. There are some containers, and the rest of the plants are in the ground.

Her herb garden is planted in quadrants; the tea area also includes catnip from Island author and herbalist Holly Bellebuono, and a medicinal section that includes valerian. Walthers used to go to Heidi Smith’s classes when she owned the herb store in Vineyard Haven. There’s a cocktail quadrant with lavender; of course, Walthers adds, “they’re all interchangeable. I have chives, oregano, dill, parsley, which I got from a friend and just planted. As far as vegetables go — sometimes they work and sometimes they don’t, but herbs are so easy.” Walthers still waters by hand. She has no beds, and insists, “I like to be creative.” Her vegetable garden will include lettuces, kale, squash, tomatoes, and cucumbers, and she is really “spur of the moment.” Last year she grew giant watermelons.

Walthers appreciates that gardening makes her feel better on all levels, besides being surrounded by a lot of heart-shaped rocks which she’s collected. Walthers is growing along with her ever-changing garden, and aren’t we the lucky ones who get to share her recipes and wisdom in her books, events, and classes.

Learn about Cathy Walthers at catherinewalthers.com. And read about her home kitchen here: http://bit.ly/WalthersKitchen. 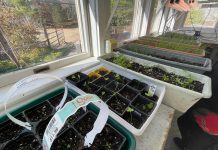 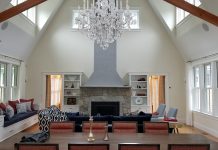