Being able to stand on the Eastville jetty and cast my Rapala floater out toward the diving terns is a blessing.

After driving to Aquinnah and looking out over the red clay Cliffs crumbling under the beach break, I rejoice.

Martha’s Vineyard is a place of great natural wonder. Just the fact that this seasonal tourist destination was spat out by a massive glacier at the peak of its growth isn’t an easy concept to grasp.

Here on the Rock, it’s all about balancing the good with the not so good. There is so much to love about living here. The community is tight-knit, neighbors are willing to help, and we can walk around pretty much anywhere at any time feeling safe and secure — there aren’t many places in the world where people can do that. So when it comes down to it, perspective is key when growing up here.

As a child, the significance of living on an island was lost on me. Everything that might seem so unique and exciting to a summer visitor became commonplace after the umpteenth time on the ferry. Biking to the beach with friends, jumping off Big Bridge (known by vacationers as Jaws Bridge), and swimming in the ocean all the time are things that many children could only dream of doing on a day-to-day basis.

It is easy to take our home for granted.

After getting my driver’s license, my microcosm was expanded from as far as I could ride my bike to as far as I could drive my silver and gray Audi. At this point, I got involved with all the Island had to offer. I fished, hiked, and explored all the hidden gems of Martha’s Vineyard.

These are the little things that to me were everyday activities. However, after getting accepted to college and starting to plan for the future, I was reintroduced to an aspect of living on a tiny island that would forever be a hindrance to my mobility (and my wallet).

Taking a boat when visiting relatives was all well and good, as long as my folks did all the planning and also paid for the trip. But now I had to step up to the plate and fork over my hard-earned summer money to pay for something that was totally unavoidable.

Whenever I told people at college where I lived, their responses would range from “I didn’t know people lived there year-round” to “Do you wear lots of Vineyard Vines?”

They would ask how big my in-ground pool is, and wonder whether my private tennis court was hard or clay. Trying to explain to a mainlander that not everyone on Martha’s Vineyard has an 80-foot yacht is an uphill battle.

This is not to suggest that Vineyard Haven Harbor isn’t filled with expensive boats, but there are many different types of people here, who all exist across a broad spectrum of wealth and lifestyles. I’m not saying those opulent folks don’t work hard, but our ports and harbors are more than just parking spaces.

Even after telling them that my parents are not CEOs, my new college friends seemed envious that I could return to such a place every summer and during breaks.

“But you haven’t seen the traffic,” I would retort in a somewhat impatient and snappy tone.

Driving through Five Corners in the middle of summer and trying to find parking on State Beach are two scenarios that for Islanders are the epitome of chaos and temple-throbbing frustration. However, when my friend who lived in Boston told me about sitting in I-95 traffic every day on his way to school (he commuted from his parents’ house), having to nudge my way through Five Corners every morning didn’t seem so terrible.

Living in such a small community, everyone knows everyone. Privacy on Martha’s Vineyard seems like a figment of the imagination, and although being inevitably involved in public life makes for a well-represented populace, sometimes the cogs of that machine seize up.

With political opinions sparking contention on social media and nosiness running rampant, I often feel like burying my head in the beach sand. But knowing everyone shouldn’t be considered a negative aspect. If my car gets stuck in the winter slush or the soft sand, I am comforted knowing my friend is right down the road with a truck and a tow-hitch. There is a sense of unconditional compassion on the Island that isn’t present anywhere else.

Sometimes, I feel stuck here; sequestered from the “real world” (Oh yes, the absence of McDonald’s and highway traffic is unbearable). But whenever I hear the high-pitched chirp of a piping plover or wave to old friends as they pass by, I think to myself, “This wouldn’t be such a bad place to be stuck.”

Lucas Thors is an intern at the Martha’s Vineyard Times.

Travel to and from the Vineyard in 2040

How we saved Martha’s Vineyard by saving our clams 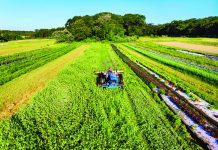