Donald Herman is an old-timey football coach not given to flowery talk. He throws predictions around like manhole covers. Herman ended a two-year retirement this summer to return as head football coach for Martha’s Vineyard Regional HIgh School (MVRHS) for a 29th year to guide Vineyarder pigskin affairs, which produced three wins and a shortened season in the past two campaigns.

But the Massachusetts Hall of Fame coach likes what he’s been seeing after a month of dog-days practices, and going against live competition in controlled scrimmages over the past four days.

For one thing, he’s got some numbers (38 players), and most of the returnees, even the young ones, are veterans following a foreshortened 2017 season that was shut down after seven games as a result of low numbers and disciplinary actions.

“I like this group of kids. They work hard, they’re conscientious and they are aggressive, they get after it,” Herman said on Tuesday after multischool scrimmages on Saturday and on Tuesday in a medley that included Mashpee High School, considered a top area team. The Vineyarders will scrimmage at Monomoy on Friday before suiting up for the regular season on Sept. 7 at 6 pm at Dan McCarthy Field in Oak Bluffs, against Atlantis Charter School of Fall River.

The Vineyarders will compete as an independent school this year, awaiting the reformation of a Cape and Islands League in 2019. MVRHS had competed in the Eastern Athletic Conference for nearly a decade. Old friends Bourne, Carver, and Greater New Bedford are on the slate, and the season finale against epic foe Nantucket will be played at Nantucket.

“I thought we were dominant on Saturday [Cape Cod Tech, South Shore Tech, and Hull]. We scored on every possession and didn’t give up points. The kids got compliments from other coaches and fans,” he said.

“On Tuesday, it was tougher against Mashpee early on. We didn’t start the way we wanted to, and they scored on us. Then we settled down and played well,” he said.

Herman’s squad has eight seniors, including five he coached as freshmen in his previous stint, and notes that sophomore Alyssa Strelecki, Herman’s third career female Vineyarder player, has joined the team, projected as a cornerback. “Alyssa played softball as a freshman. She works hard and kept at it through tough practices, when other kids weren’t able to,” Herman said.

Herman is still hoping that a JV team can be built. “We’ve got 38 kids now. If we can get to 42 or 43, we can field a JV squad,” he said, noting that players can sign up through Wednesday of the first school week.

The Vineyarders have four senior captains, Tristan Scheller, Andres Garcia, Junior dos Santos, and Michael Courtney, and a savvy quarterback in senior Ivan Shepherd, an oft-beleaguered figure under center over the past two seasons. “Ivan leads the offense. He has good leadership skills,” Herman said, noting “The seven coaches have worked hard to know the kids and coach to their abilities. We’ve got several freshmen who have emerged, and some players can play two or three positions,” he said.

The Vineyarders have a coaching staff with a history of success as players and coaches. Tim Millerick, Jason O’Donnell, Ryan Ruley, Kyle Crossland, Rusty Ventura, Mike Cutrer, Jason Neago, and Herman have played or coached in 17 state high school Super Bowls, winning 12 of them.

Herman is not contemplating a West Coast run-and-gun offense. “We’ll run a ball control, opportunistic offense. Some may find it boring, but I don’t care as long as it works,” he said, emphasizing that the Vineyarder tradition of aggressive play is key to success in 2018. ”That’s been missing a bit in recent years, and the kids know it’s critical,” he said.

So as Herman sees it, he’s got an experienced bunch of players, good athletes who are injury-free through preseason work, a solid core of coaches who know and do their jobs, and he is eager for his team to put the proof in the pudding. 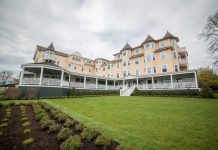