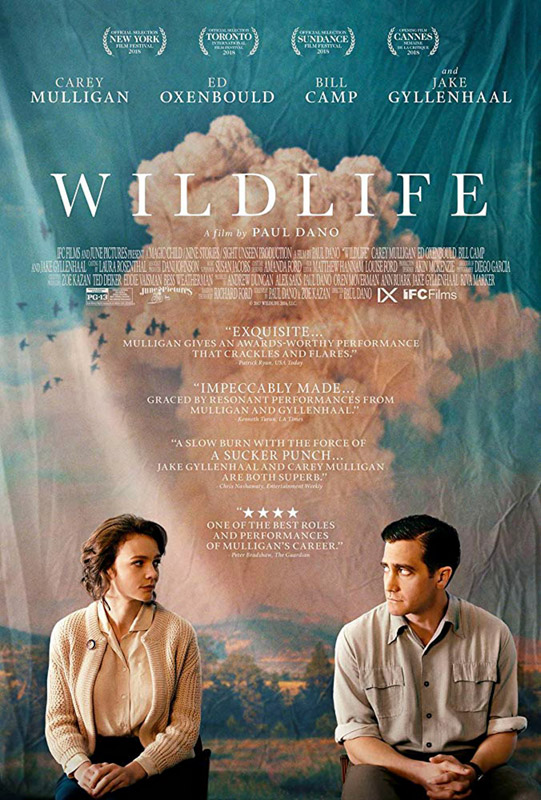 “Wildlife,” the story of a 1960s family’s disintegration, now plays at the M.V. Film Center. Two top-drawer actors star: Carey Mulligan as the wife Jeanette, and Jake Gyllenhaal, the husband Jerry. Newcomer Ed Oxenbould fills out the cast as their 14-year-old son Joe, along with Bill Camp as predatory Warren Miller. Adapted from Richard Ford’s 1990 novel, the film is directed by Paul Dano from a screenplay by Dano and Zoë Kazan. “Wildlife” was nominated for both Cannes and Sundance awards.

The Brinson family has recently moved to Great Falls, Mont., where Jerry works as the local golf club’s pro. When he loses his job for “overstepping the boundaries with the customers,” Jeanette goes back to work as a swimming instructor and Joe takes a job at a photography studio. Jerry mopes around until he decides to fight wildfires near the Canadian border. Both Jeanette and Joe feel abandoned, and she soon takes up with wealthy car dealer Miller. The romance begins when the two have dinner at Miller’s fancy home. Wearing provocative evening attire she calls her “desperation dress,” Jeanette gets drunk and starts a serious flirtation with Miller that Joe uncomfortably has to watch.

Jeanette inappropriately shares her emotional turmoil with her 14-year-old son, and her new romance careens into a sexual liaison that Joe is forced to observe. The teenager agonizes over his mother’s behavior, and feels torn between her and the father he’s devoted to. She takes Joe to see the wildfires and understand the danger his father chooses to be in. Once the arrival of snow quenches the fires, Jerry returns home and the family quickly disintegrates.

Dano sets the scene with stunning overviews of this small, isolated town and the majestic mountains behind it. The cars, including Miller’s suggestively pink Cadillac, the clothes, and decor effectively capture the 1960s. The director uses close-ups of Joe watching and reacting to the tensions between his parents. When a female classmate befriends him, he’s reluctant to pursue the relationship very far, no surprise considering the problems with his parents he observes.

Jeanette’s move toward independence becomes as important as Joe’s reactions, and Mulligan creates a powerful portrait of a complex, conflicted, and not very appealing woman. Her clothes and behavior help illustrate the changes she is undergoing. The film’s narrative anticipates Betty Friedan’s 1963 book, “The Feminine Mystique,” credited with sparking the women’s liberation movement. Jeanette serves as the archetype for how women will change in the coming years. Smoke from the conflagration moves ominously into Great Falls as a reminder of the possible danger to this small community. The wildfires themselves serve as an important metaphor for the passions roiling this family.

“Wildlife” paints a stark picture of the Brinson family, one that can be hard to digest. But top-notch performances by the cast and the film’s compelling camera work make “Wildlife” worth viewing.

Information and tickets for “Wildlife” and other films playing at the Film Center and the Capawock are available at mvfilmsociety.com.