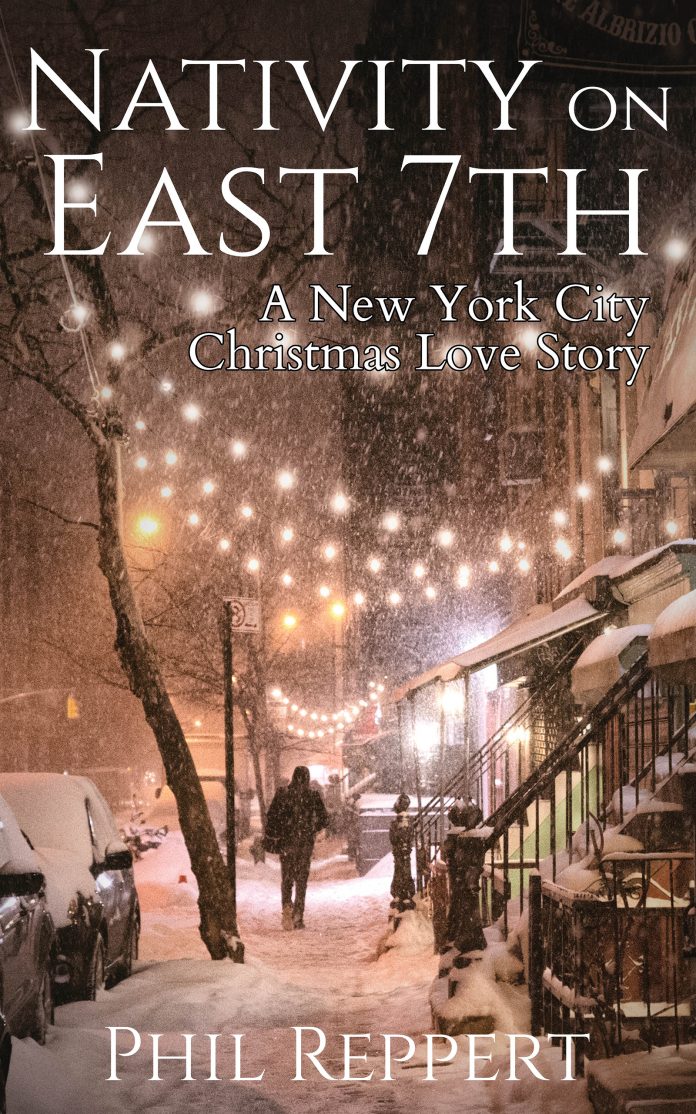 We’ve passed Thanksgiving and are racing toward Christmas. Island author Phil Reppert has transformed the traditional telling of the Nativity into a modern-day tale. He locates “Nativity on East 7th: A New York City Christmas” squarely in Manhattan’s Lower East Side, which harbors his main characters.
Reppert explains about the inspiration for his book, “Many years ago I heard a Catholic sister give a wonderful Advent talk on the Christmas story. She said that each year we should approach the traditional spiritual story with fresh eyes and an open heart, seeing new and deeper layers of meaning in the characters and events of the first Christmas. She said, ‘Listen to the story with your heart, place yourself in the story, and find out what it means to you today!’”
The book is a coming-of-age story for the 20-year-old Joseph, the protagonist (an aspiring woodworker) and teller of the story. His journey leads him to discover that relationships and connection with others are what he is seeking. His bonding starts off with the “Boys of Benny’s” — an odd assortment of rough-and-tumble local bar characters from a Vietnam vet to an aging hippie to an EMT, who will come in handy for the birth scene in a night blizzard. “The Boys of Benny’s, the Shepherds, are the ordinary, everyday working folks, just trying to make it in life,” Reppert says.
But Joseph is soon drawn across the street to St. Francis Parish and the extraordinary couple who cook meals for the homeless, and the elderly activist priest, Father Jasper. Reppert found inspiration for this wise and compassionate man in a minister he heard preach one Sunday in New York City, the well-known social activist the Rev. William Sloane Coffin. Reppert says, “This was the first time I heard a minister speak so boldly on the unjust treatment of the poor and homeless in New York City, and the church’s duty to speak out and act on their part,” Reppert says. “I must admit, Rev. Coffin, along with other theologians I read, had a great influence on the development of Father Jasper’s character and mystique.” One of the characters in the book says of Father Jasper, “He is an addiction, he makes you high on love.” Reppert completes his trio of wise men with a rabbi and an imam who show up at various times in the book.
Reppert situates his story in Manhattan because, “I love NYC for the cultural diversity, the energy, and the distinct neighborhoods. As a 20-year-old, I spent a great amount of time in Greenwich Village, more in the East Village. And yes, on Friday nights I frequented a local neighborhood bar on East 7th Street, where old men sat alone at the bar drinking their whiskey and we ‘kids’ played countless games of pool while drinking countless juice-size glasses of beer. East 7th Street was a neighborhood made up of locals and newbies, working and professional classes, and people from all ethnic backgrounds.”
Reppert casts Mary as Maria, pregnant and alone in the world until she becomes involved in the parish. But as Reppert says, although outcast from her family, she “approaches her challenging life situation with maturity, acceptance, hopefulness, and unshaken faith.”
He explained that his initial intention was to write a short, modern-day Christmas story. “I wanted to try something different for this particular Christmas because I’d heard our kids’ complaints from last Christmas: ‘Must we read it again? We know the story.’ The story I started to write was not a warm and fuzzy sentimental story, but a modern-day story about the outcast, the persecuted foreigner, the poor and homeless, the working class, the politically oppressed. As I started writing, it morphed into something bigger, until the characters took a life of their own and I had no idea where the story was headed.
The author continues, “I started writing this composition just prior to the last presidential election, and it is an understatement to say that I was greatly affected by the lack of civility and ugliness in our country. Writing this novel was my form of journaling, not only a way to deal with my own anger and disgust, but to look deeply into my own complicity in the matter, my prejudices and egotistical tendencies. I have never before used fictional characters and scenes to imagine a world that could be different, a story where a ‘new love’ is born into.”
In “A Note from the Author”at the end of the novel, Reppert writes, “Christmas is the time where we are called to look deeper, rededicate ourselves, stretch our hearts open a little farther, reawaken ourselves to the divine love born into this world, incarnate in a little peasant ‘baby,’ found in a manger, for ‘Love never fails,’ ‘ Love never ends.’ Where there is love, there is hope.”

“Nativity on East 7th: A New York City Christmas” by Phil Reppert. Available at Bunch of Grapes in Vineyard Haven, Edgartown Books, Cronig’s Market, and online. You can learn more about the author at philreppert.com.