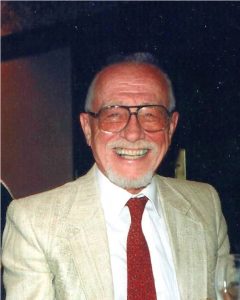 Dick was born on Dec. 18, 1929, in Sharon, Pa., first-born child of Janet (Ward) Rice McEwen and Doyle Joshua Rice, both of Ohio. Dick spent most of his childhood in Atlanta, Ga. He enlisted in the U.S. Air Force immediately upon graduation from high school, and spent four years in the service, including during the Korean War. He spent most of his service in Okinawa, Japan, and Korea.

In the early 1960s, Dick obtained a degree in industrial arts and education from Kent State University in Ohio, in preparation for becoming a teacher.

Finally, in 1977, Dick and his family returned to Martha’s Vineyard, where he spent the next 40 years as a boatbuilder at the Martha’s Vineyard Shipyard, a builder-contractor, and lastly a clerk in the plumbing department of Ace Hardware in Vineyard Haven. While a contractor, he built several houses on the Vineyard.

Throughout their years on the Island, Dick and Jo-Anne were members of the Unitarian Universalist Society of Martha’s Vineyard. They were also proud owners of a cottage in the Campground, as well as their home in Longview in West Tisbury, which Dick and his son Doyle built.

In December 2015, two years after Jo-Anne’s death, he moved to Riderwood Village in Silver Spring to be near his son’s family.

Dick will be most remembered for his skill as a builder and craftsman, and his seemingly innate ability to fix anything and everything.