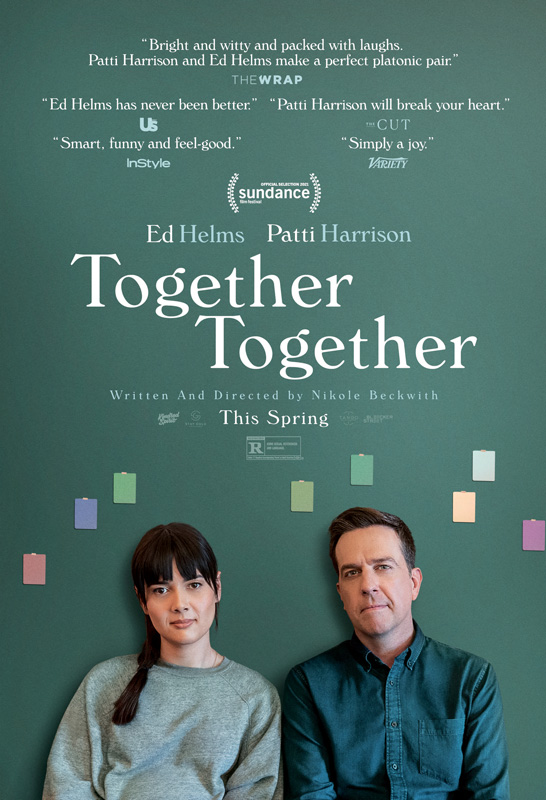 “Together Together,” a comic tale about surrogate parenting, plays Thursday, June 17, at the M.V. Film Center. The film narrates the story from the future father’s viewpoint, rather than from that of an expectant mother.

A 2021 Sundance Grand Jury prize nominee, “Together Together” establishes its comic approach when Matt (Ed Helms) asks Anna (Patti Harrison) questions like, “Have you ever stolen anything?” It quickly becomes clear that he has chosen her to carry his baby-to-be. A sight gag of Matt carrying a giant teddy bear confirms that this will be a story about him and his peccadillos.

The film is structured around the three trimesters of pregnancy, the issues involved, and the conversations that ensue between Matt and Anna. The viewer first sees Matt celebrating with a conventional family — his brother, wife, and two small children. When his parents visit, he confusedly announces, “I’m pregnant.”

Another debate concerns whether or not Anna will tell anyone about her pregnancy. Unlike Matt, Anna doesn’t plan to share that information. To illustrate his goofiness, Matt brings “pregnancy” tea to the coffee shop where Anna works, along with a pair of clogs for her because she’s on her feet. A reaction to the peculiar relationship between surrogate and father-to-be is further illustrated by an indignant co-worker (Julio Torres), who has his former lovers tattooed on his body.

When Matt bumps into Anna and her male friend Bryce, sex is the next issue the film addresses. “Did you do it?” asks an upset Matt. “Are there multiple Bryces?” A debate follows about the appropriateness of sex during pregnancy. “You can’t tell me not to have sex for a year,” insists Anna.

As this noncouple enters the second trimester, the film fleshes out their characters. Matt congratulates Anna, who had a high school pregnancy that led to adoption, in deciding to continue her education. When he shows Anna the empty room that will be the nursery, the two eliminate Post-it colors one by one in an absurdity about their future preparations.

Once Matt and Anna agree to stop calling the baby-to-be “it” and eliminate nongender-specific choices like “Radio,” they decide on the even sillier name of “Lamp.” After they select a crib together, a klutzy Matt is shown trying and failing to assemble the parts.

Another issue that comes up concerns the baby shower hosted by Matt. Here Anna clarifies to the guests that she’s not Matt’s partner, but his surrogate. Responding to people’s expectations, she tells Matt that they spend too much time together. “We need better boundaries,” she says.

When the film enters the third trimester, one scene shows Matt clumsily attempting to try on a baby sling. Once he does, he’s pictured cuddling a stuffed animal in his arms. In a group class, the viewer sees Matt and Anna struggling with the anticipated late pregnancy positions. Next come the various stages of labor and anticipated delivery.

What keeps “Together Together” working is its treatment of pregnancy from a nontraditional point of view. When the plot starts to slip toward conventional couples, Matt and Anna correct the film’s direction. Instead, the film gives the viewer a fresh perspective on a very old story.

Information and tickets for “Together Together” and other Film Center films are available at mvfilmsociety.com.