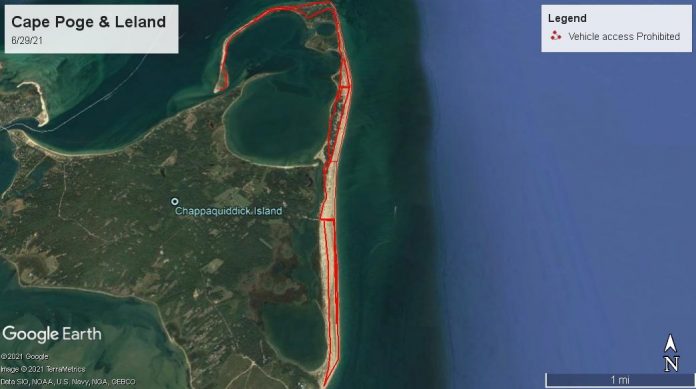 An impending wave of piping plover broods has forced the Trustees of Reservations to close their oversand vehicle (OSV) trails that access Cape Poge Wildlife Refuge via Dike Bridge on Chappaquiddick, according to a Facebook post by the Trustees.

East Beach and Leland Beach remain open to pedestrians, while parking is available at Dike Bridge, with overflow parking at Mytoi Japanese garden.

The Trustees have also canceled their Cape Poge lighthouse tours until further notice.

Although the Fourth of July is one of the busiest times for beaches on-Island, the Trustees wrote in the post that they are required by state shorebird management guidelines to implement a full beach closure as the state and federally threatened species begin to hatch their young. “This situation is similar to the closure at Norton Point in 2019, when the location of shorebird broods was in the general vicinity of the OSV access entrance, thus shutting off vehicular access to the entire beach corridor,” the post states. “OSV access is allowed for essential travel by emergency and Cape Poge resident vehicles.”

Pedestrian access is still allowed on all Trustees-managed beaches. At Norton Point, 1.5 miles of beach remains available to OSV access.

The Trustees will reopen the OSV trail to Cape Poge as soon as they are able. “We thank you for your patience and understanding, and realize this OSV corridor restriction will impact planned recreational and sporting activities,” the post states.