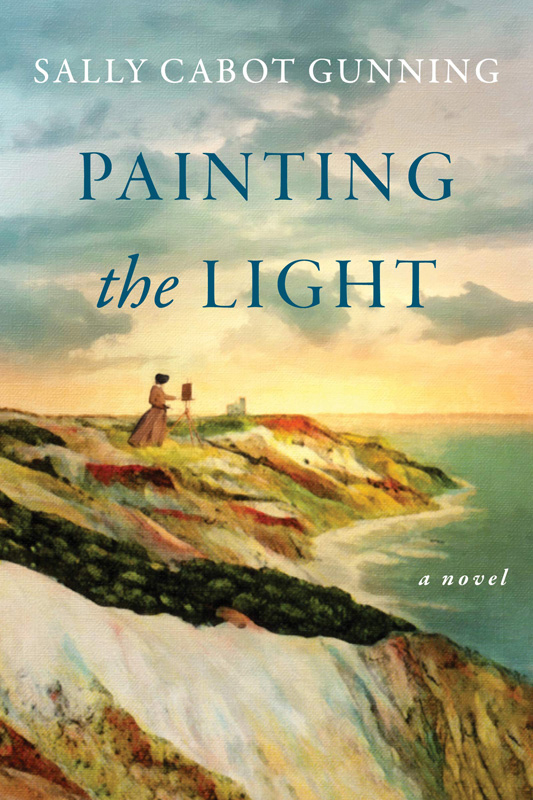 Sally Cabot Gunning’s compelling novel “Painting The Light” doesn’t just get the colors of Martha’s Vineyard right, but her prose gets every nuance in the complex relationships surrounding Ida, the protagonist in the Cape Cod author’s newest book.

The story begins in 1893, with Ida struggling for respect as an art student at Boston’s prestigious Museum School, which the registrar told her just “wasn’t for ladies.” Nonetheless, her talent with watercolor painting earns her a place in an exhibition, at which she briefly meets Henry, who is enamored by a stunning portrait she has done.

But we lose sight of him for a while as Ida’s Beacon Hill life is destroyed by a triple tragedy when her parents and brothers are drowned at sea. For the next year she grieves and loses all zest for life … and art, until a chance meeting in Boston with Ezra Pease, a Martha’s Vineyard sheep farmer and co-owner of a salvage business who initially woos Ida off her feet. Gunning writes: “After he’d discovered she was an artist, Ezra had talked of his island home as an enchanted place; he described a rising tide of affluent tourists always on the lookout for art … Ezra was a man of land. A sheep farmer. A man who would never be swallowed by the sea. And perhaps there lay the greatest evidence of Ezra’s charm: the fact that he’d managed to talk Ida into island life, that a woman who abhorred the idea of water now lived surrounded by it.”

Wedding bells ensue, Ida gives up Boston and her budding success for the life of a farmer’s wife … and life from that moment on is never the same again. Ezra turns out to be a mean-spirited, drinking, conniving husband. Their relationship disintegrates, and Ida, living on the farm now, has no time for art.

Her world explodes again when Ezra is purportedly swept away in a vicious storm when out at sea on a business trip. While there might not by then have been any love lost, what follows is a complicated unfolding of truths about Ezra’s life, and what he had really been up to behind Ida’s back.

Henry shows up again as the executor of the business that Ezra and his partner ran, and becomes an important player in Ida’s life as she tries to unwind the hazardous economic mess Ezra has left her with. But attraction sets sparks to flying, and things get even more complicated. Furthermore, Henry provides both freedom — from teaching her to ride a bike, which she relishes — to a chance to break the norms of “appropriate” relationships.

Gunning’s description of Henry reveals her immense talent as an evocative writer: “If she were to paint those eyes she’d use something warm, like burnt sienna, and she’d put a touch of sienna in that wheat-colored hair. Perhaps a touch of that wheat in the eyes … But it wasn’t so much the colors that always drew Ida to seek out Henry Barstow’s eyes — it was the invitation in them, to laugh, or to live, or to share some bit of knowledge or thought or feeling or … what?”

As the push and pull of their relationship plays out, so too does one with Lem, the man who helps Ida with the farm and teaches her the ropes of raising sheep, which happens to be fascinating. He is enigmatic, trending between a possible romantic interest to, as he claims, the best friend Ida has — which she desperately needs in fighting the odds both in terms of running the farm herself and the lonely social isolation she experiences as the local residents shun her.

Ida does, however, return to art, biking about in all weather to paint Vineyard scenes, frustratingly trying to capture the special light that is so endemic to the Island. Gunning writes with exacting detail of Ida’s struggles with her watercolors to the point where you feel you are standing beside her looking out to the landscape.

Gunning applies her incisive writing skills in describing not just the main characters, but others such as her none-too-friendly, taciturn aunt-in-law and her daughter; Oliver — Ezra’s illegitimate child whose active imagination helps him navigate his orphaned status; and Ezra’s “partner in crime” Mose, who was on the ship with him. Gunning builds a community of distinct people who play a role in Ida’s life.