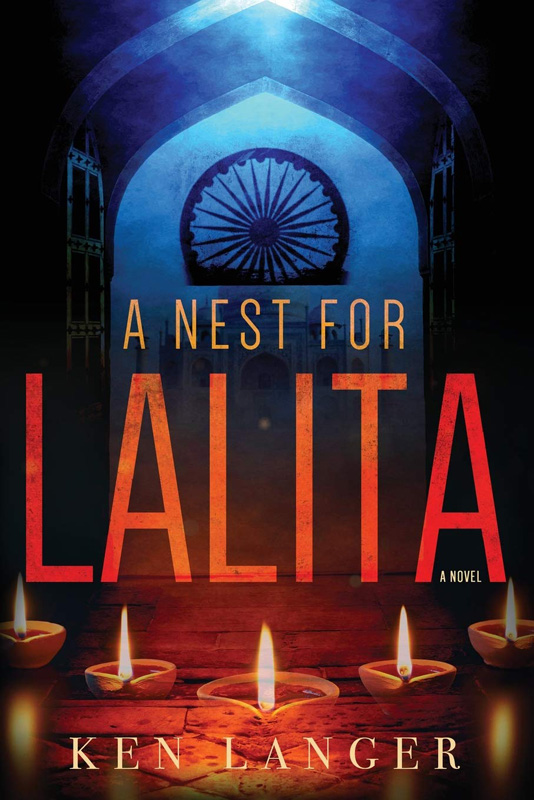 Ken Langer’s intriguing novel, “A Nest for Lalita,” opens with a hell of a prologue where we experience first-hand a level of domestic violence beyond imagination. Lalita’s suffering at the hands of her highly abusive husband sets the tone of emotional urgency for our protagonist’s valiant struggle to spearhead the building of a new center in India for women survivors of abuse, a safe haven at Behera House.

Langer’s labyrinthian tale interweaves modern Indian politics, economic turmoil, murder, seedy sex, corporate greed, and corrupt priests into a compelling narrative. He says of his leading character, “Meena, an Indian woman who is a feminist and social activist, is complex. Years ago, I wrote my Ph.D. dissertation on Sanskrit love poetry. In this genre, women are inevitably beautiful and subservient to their lovers and husbands. In writing my dissertation and in the time that followed, I never thought about the real lives of women during those times, specifically the injustices they suffered at the hands of their husbands and society. Years later, I lived in India with my first wife, an Indian woman, who was a social activist herself, and, through her and contact with her social activist friends, I became acutely aware of the painful plight of Indian women, especially those living in rural communities. Writing “A Nest for Lalita” was a kind of atonement for being blind to the fate of women in a traditional, patriarchal society. A way for me to finally stand with those who are on the right side of history, so to speak.”

There is also Meena’s bombastic, unfaithful, Indian architect husband, Kesh, who, while he can turn your stomach, is deeply committed to building sustainable projects. Langer says, “Kesh just popped into my head. Someone who represents both sides of India. He is a shameless misogynist — taking after his womanizing father, a former maharaja — and thus represents the old, patriarchal India; but he is also the leading sustainable architect in India who has devoted his life’s work, when he’s not running after women, to fighting climate change by changing the course of India’s construction industry. Kesh’s misogynist humor is a defense mechanism — a way for him to protect himself from the many social ills that surround him. In this sense, he is a microcosm of India today and probably the most complex character in the novel.”

In the novel, the American award winning green architect, Simon Bliss, is selected to build the flagship center. He comes with a great deal of baggage from his past career, as well as a failing marriage. Langer uses this outsider to give us a vividly detailed, sensory experience of India, its temples, cities, foods — and a great deal about the Hindu gods and goddesses. Having fallen for Meena, Simon becomes entangled in the intrigue that creates the compelling story. There are additional important people who populate the plot, all with their own motives and agendas that keep us guessing as to how the tale will unfold.

The author’s love of India began when he spent a college year in Varanasi. After earning his Ph.D. in Sanskrit and Indian Studies from Harvard, he spent two years in Pune, India, translating Sanskrit romantic poetry, which he adroitly sprinkled throughout the text.

Langer’s concern for green energy and India is not only literary; he worked in New Delhi as a consultant to high-tech and renewable energy companies and served as special consultant to the United States Department of Energy. In 2000, Langer founded EMSI, an international green building consulting company. “I wanted to write a novel set in India to organize, galvanize, and reflect on my years of living and working in India,” Langer said. “In this way, the writing was very therapeutic. To use an India metaphor, it was like taking dozens of individual marigolds, my experiences, and stringing them together into a single, coherent garland, which was the story.”

“A Nest for Lalita,” by Ken Langer. Dryad Press. Available at Edgartown Books and online. On Saturday, August 14, at 4 pm, the West Tisbury library will present an online book talk with Langer that will include a Q&A. Contact wt_mail@clamsnet.org for a Zoom invitation.