Louise Hoover Neuhoff died of natural causes on Nov. 18, 2021, at her longtime home in Edgartown. She was 91, and had been a summer resident on the Vineyard for more than 60 years, where she gave generously to a variety of causes from historic preservation to combating hunger. 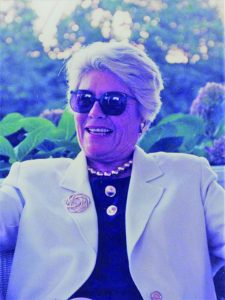 Louise Reeve Hoover was born on Oct. 26, 1930, in Washington, D.C., the first of three daughters and second child of Reeve and Marion Tully Hoover. She grew up in Georgetown, and was educated at the Potomac School. She graduated from the Westover School for Girls and continued her education at American University, where she studied architecture for a time.

At university, Louise met her future husband, Roger A. Neuhoff, and it was love at first sight for both of them. They married at Christ Church on June 21, 1952, and settled in Washington. Louise volunteered for the Red Cross while raising four children, and later served on the boards of the National Symphony Orchestra and the Kennedy Center. She championed equal rights for women, and advocated for an end to the Vietnam War.

In the late 1950s she found her true second love when friends introduced Roger and Louise to Martha’s Vineyard and the town of Edgartown. After a summer or two of renting, in 1960 they bought the Tower House on Starbuck’s Neck, which would become the summer home to four generations of Neuhoffs. Louise felt truly at home in Edgartown, entertaining new and old friends, chasing her children around the tower, reading three books at once, and making hats for children’s dances at the tennis club. She loved volunteering at St. Andrew’s annual book sale, loved it when the wind blew from the north, and most of all loved the Tower House.

In 1970, Roger and Louise bought the Sandbox, a small beachfront house on Chappaquiddick several doors down from the Chappy Beach Club. They were among the founding members of the Royal Chappaquiddick Yacht Club, a good-natured spoof on the Edgartown Yacht Club that famously one year fired a tiny cannon at the EYC race committee boat, which to everyone’s delight fired back. The fun-loving RCYC members also founded their own watering hole at the Chappy Beach Club, which they dubbed the Crab Hole. A painting by Vance Packard of the Crab Hole endures as proof positive of summers well spent.

In the late 1980s, Louise and Roger moved from Washington, D.C., to Florida, where they created a perfect vacation destination for their grandchildren during school breaks.

On the Vineyard, Louise was devoted to many causes, and believed strongly in preserving the beauty and history of the Island. A lifetime member of the Vineyard Preservation Trust, she helped create the Hilly Garden, a tribute to her sister Hilary Luther, which graces the grounds of the Dr. Daniel Fisher House. She financed the library at the Carnegie in memory of her son Geoffrey. She gave generously to a rehabilitation center for turtles, and to all animal shelters on the Vineyard. She also gave to the Martha’s Vineyard Hospital and the Island Food Pantry, among others.

She was a member of the Chappaquiddick Beach Club, the Edgartown Yacht Club, and the Chevy Chase Club.

She was predeceased by her son Geoffrey in 2012, and by her loving husband of 63 years, Roger, in 2015. She is survived by her three children: daughter Marion Hickman and her husband Simon Hickman of West Tisbury, and sons Eric Neuhoff of Vero Beach, Fla., and Alexander Neuhoff of Maui, Hawaii; 10 grandchildren; and seven great-grandchildren.

The family wishes to thank Drs. Jeffrey Zack and Jeffrey Horenstein, nurse Mary Alice, and the wonderful team at Lifeguard Medical Group, along with Sandie Dolby and Rachel from Horizon Geriatrics.

Services will be private.