James Ray Phillips, 74, of West Tisbury, passed away on Saturday, May 28, 2022, following a surgery. Known by all as Ray, he was an honest, hardworking, happy-go-lucky guy, and always wanted everyone around him to be happy too. His unforgettable smile ensured they were, and he always broke silence with laughter, whether it was appropriate or not. 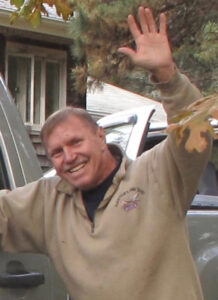 Ray was the third of five children born to Allie Marie Young and Roland T. Phillips on October 23, 1947, in Plainview, Texas. Ray described Plainview as truly a plain view, with “nothing but nothing but silos and irrigation ditches.” He grew up playing with tin can cars, walking home for lunch from school, and adoring his oldest sister and best friend Linda.

In high school, Ray was on the football team, and spent weekends working on his baby blue Ford convertible, which he would take on long drives across the border. Fresh out of school, he married his high school sweetheart, Cynthia Daniels, and had his first child, Misty Dawn.

At 20, Ray went into the Army for six years, where he rose to the rank of SP5, servicing tanks as a sheet metal worker and welder. He earned decorations in marksmanship, and the National Defense Service Medal while stationed in Bamburg, Germany.

After the Army, he moved to New Orleans, where he worked as a chef in the French Quarter. He lived in a tiny attic apartment he called “the cloud,” filling it with beautiful plants, and tanks of exotic fish.

Ray worked around the clock, six days a week, only taking Mondays off. Those Mondays were for red beans and rice and doing laundry, the tradition of all working New Orleanians. That was until he met Victoria, who worked with him at the restaurant, and Mondays became a great adventure day. The two fell in love over picnics in Fontainebleau Park, and early mornings fishing from a skiff on the Intracoastal Waterway at Shell Beach.

After many years working and adventuring together, camping throughout the Smoky Mountains, the Grand Tetons, and their favorite, the Athabasca Glacier in Banff, Ray and Victoria had two children, the absolute joy and center of Ray’s life — Thomas Lloyd and Lonni Marie.

When the kids were ready to start school, the family decided to move to the Vineyard, where Victoria had grown up. Like all things Ray, he found his own way.

Done with the restaurant world, Ray took his passion, gardening, and turned it into a living by starting a landscaping company. He called it As You Like It, because he was always focused on pleasing others and making them feel welcome. Over the next 25 years, Ray built up clients who became dear friends.

In the winters, Ray (never content to sit still) worked at the West Tisbury and Chilmark schools as a custodian, where he was beloved by the staff and children alike. On winter evenings, he relaxed by lighting a wood fire and playing dominoes with his family.

This summer, Ray was looking forward to doing the things that forever brought him joy — fishing with his son TL, taking long beach walks and drives with his daughter Lonni, game nights with family friends, and going out for a fireman’s burger at the Ag Fair.

Ray is survived by his wife of 38 years, Victoria Riger Phillips, his son Thomas Lloyd Phillips of Portland, Ore., his daughter Lonni Marie Phillips of Chilmark, his sister Debbie Rush of Phoenix, Ariz., and his brother Leo Phillips of Plainview, Texas.

Ray’s family will host a celebration of “all things Ray” on August 31; details to come — please join us with memories and laughter. In lieu of flowers, donations can be made in Ray’s name to Island Food Pantry, P.O. Box 1874, Vineyard Haven, MA 02568 or online at islandfoodpantry.org. And if you see any island kids fundraising outside of Cronig’s Market, happily hand over a little extra cash.