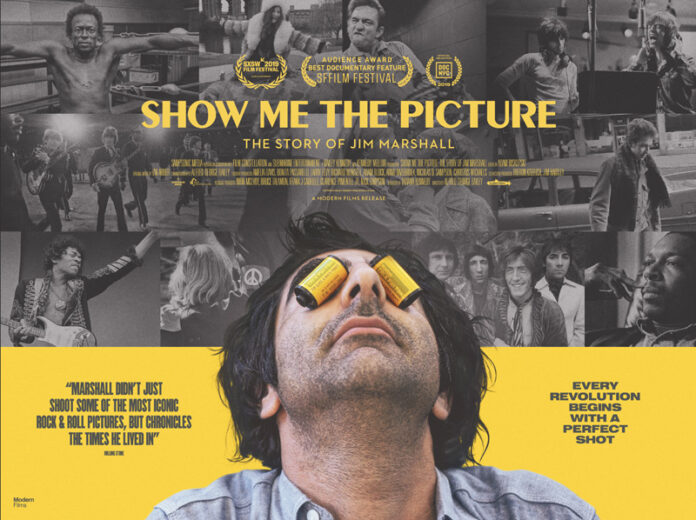 “Show Me the Picture: The Story of Jim Marshall” is the latest fascinating documentary to arrive at the M.V. Film Center. Playing on Friday, July 8, at 7:30 pm, this biopic focuses on celebrated photographer Jim Marshall. Marshall photographed the legendary music and musical stars of the 1960s and 1970s.

His longtime personal assistant, Amelia Davis, the recipient of his estate, inspired the awardwinning “Show Me the Picture.” Davis was also responsible for ensuring his status as one of the most important photojournalists of his generation. She will attend the screening and answer questions.

One of his photos is indeed worth a thousand words. Lighting and composition in his photographs were secondary; the subject was what mattered. He was a man who built his photos on the people who let him into their life. Beginning his career in Haight-Ashbury, his core family was there, and by 1968, he was called “the little man with the Leica.”

The son of immigrant parents, he had a fascination with the camera from an early age. Born in Chicago, he moved with his family to San Francisco. His father left when Marshall was 2 years old, causing a loss that never left him. After serving in the Air Force, he made San Francisco his ground zero.

Always the intimate outsider, he went to the Monterey Pop Festival in 1967, capturing the famous portrait of Jimi Hendrix burning his guitar. Miles Davis and Coltrane accepted Marshall as one of their own. Annie Leibowitz defined him as “the rock and roll photographer.” His 1969 San Quentin photograph of Johnny Cash flipping the bird became one of the most iconic images ever of that prison.

Marshall’s work never seemed to be enough for him, and eventually he developed an addiction to cocaine. Fueled by the drug, he toured with the Rolling Stones in 1972. “I was doing two grams a day,” he observed, and cocaine is said to have almost driven him to lose his sanity. But he was one of the few people who came back from addiction. A lot of people didn’t understand Marshall. That’s why, the film says, he grabbed onto the people who did.

“If you don’t have the access, you don’t have the picture,” Marshall said. People trusted him, and that allowed him to truly express himself. In 1963 Marshall went to the Newport Jazz Festival, and his many photos taken there are a record of the event. At Candlestick Park in 1966, he was the official photographer for the Beatles, with images out of “A Hard Day’s Night.” It would be the last show they did together. He was also the head photographer at Woodstock in 1969.

The Fillmore Club in San Francisco was at the height of the 1960s counterculture scene, and Marshall was there for a seminal moment in rock-and-roll history. Saying music was about self-transformation, he shot everything that was going on in addition to the musicians. Marshall believed seeing was a creative act. His was a personality not split but fractured, according to the film.

Guns were a big part of his life, and in 1984 at age 48, he was convicted of attempted murder, spending his time in work release to avoid prison. His ethics around people were malleable, but not about the camera. Every photograph he took defined the moment.

In 1984 Michelle Margetts met Marshall in a bar. “I found him hideous: a malevolent gnome,” she said of her short-term boyfriend and longtime friend.

His Leica camera was an extension of himself. “I own everything I shot,” he said. “I have no kids. My photographs are my children.” He died in New York in 2010.

His personal assistant, Davis, has edited eight Marshall monographs, as well as curating exhibitions of his work. In addition, she was the catalyst for his posthumous receipt of the Trustees Award in 2014 of the Grammys Recording Academy for his chronicle of 20th-century music. In addition to an exhibit of Marshall’s photography this summer, the Field and Granary Galleries will sponsor the film screening at the Film Center, making it free to attend.

Information and tickets for “Show Me the Picture” are available at mvfilmsociety.com. For information on movies playing at Edgartown Cinemas, visit entertainmentcinemas.com/locations/edgartown.