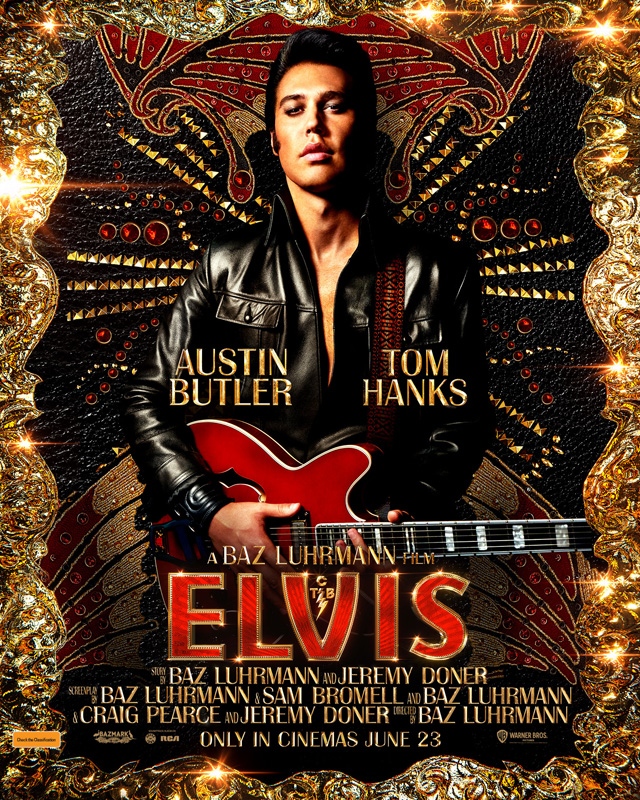 “Elvis” comes to the M.V. Film Center on Friday, July 15. This biopic takes on the legendary rock and roll singer, played by Austin Butler, and his manager Col. Tom Parker, played by an almost unrecognizable Tom Hanks.

Australian director Baz Luhrmann begins the film with Colonel Parker and slam-bam music. Tom Hanks wears a prosthetic nose and a big belly for his role as Presley’s malevolent aide-de-camp, who recognizes Presley’s talent and promotes it, but also controls his career. In addition to his acting prowess, Butler also sings many of Elvis’s songs.

While he had a rich and successful voice, it was Presley’s sexually provocative delivery style that got him noticed and led to his fame. Young women are shown in the film responding to his performances with screaming and hysteria.

Once Parker hears Presley sing, he takes over as his agent, and the film spends most of its time with him. Presley’s career begins with Sun Records, where he sings a mix of country music and rhythm and blues. He enjoys Black music, and the movie incorporates many of the Black musicians who influenced Presley, along with some who didn’t.

From Sun Records, Presley moved on to RCA, where he made the 1956 hit, “Heartbreak Hotel.” Other hits in the film include “Hound Dog,” “All Shook Up,” and “Are You Lonesome Tonight?” When he appears on TV, the film portrays his provocative style as leading to moral outrage and threats of arrest.

Nevertheless, Presley became a key figure in the popularization of rock ’n’ roll, and helped inspire a sea change of social customs. Parker cleaned up Presley’s dishonorable reputation by arranging for him to spend two years in the Army. He met Priscilla Beaulieu (Olivia DeJonge), and later married her. Their daughter, Lisa Marie, who later became a singer, is shown as a small child.

When he resumes his career, Parker talks Presley into making a series of less-than-successful movies, including “Jailhouse Rock,” “Blue Hawaii,” and “Viva Las Vegas.” Then in his TV comeback special, also called “Elvis,” Presley returns to his signature style, instead of singing a Christmas song as Parker had promised. The movie portrays his many successful performances arranged by Parker at the Las Vegas International Hotel. He won three Grammy awards, and earned a Guinness World Record as the best-selling solo artist of all time.

Presley’s relationship with Parker remains contentious, with his career controlled by the latter. In the meantime, Presley is shown gradually becoming addicted to prescription drugs, and he died of a heart attack in 1977 at the age of 42.

While “Elvis” is undercut by Luhrmann’s hyperbolic approach to rock ’n’ roll as well as earlier music, it’s the Presley songs, as sung by the talented Butler, that make the movie worth watching.