Ursula Prada passed away unexpectedly on July 9, 2022, at her home at 134 Katama Road, Edgartown. She suffered a short but intense illness before she died at 62 years. 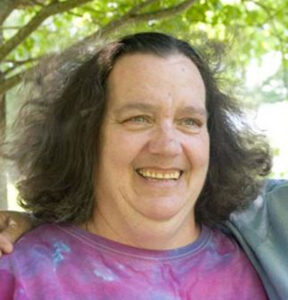 Ursula grew up in and spent her adult life in Edgartown, and was the administrative assistant to the building inspector in Edgartown for many years. She was quite well-known among contractors, developers, and new homeowners for her knowledgeable help in matters relating to this extremely active sector of Edgartown’s economy.

Ursula was born to Richard and Maurita Prada on Dec. 1, 1959, at the M.V. Hospital in Oak Bluffs. Though many people are unaware, Ursula was born prematurely through medical induction of labor, because Maurita had an Rh factor reaction against the baby. Dr Robert Nevin ensured that mother and baby weathered the crisis. Ursula joined sisters Chris, Barbara, and Mary, and brother Vincent. All of us older siblings remembered the homecoming of Mom and Ursula from the hospital, not least because Dad was ready to relinquish his role as full-time childcare grunt!

As described in her sister Barbara’s obituary, about six months ago in this paper, the Prada home at the southwest corner of Katama and Clevelandtown Roads was full of children, friends, and family. Ursula was the baby of the family, and suffered the fate of all youngest sibs in becoming the ultimate tagalong. In the earlier years, us older sibs were not trusted with her outside the yard. The minute we left the property for adventures at the sandpit, Green Hollow, or Collins Beach, Ursula was surrendered to Mom in the house. More often than not, Ursula was displeased by these developments, and protested loudly.

In contrast, when Maurita started working for Principal Jim Tripp at Edgartown Elementary, Ursula was babysat by our auntie Cat Enos on Upper Main Street. This benefit accrued to Ursula due to her status as youngest sib, because the rest of us spent our days at the school. Ursula adored Auntie Cat forever after, and felt exceedingly privileged to have enjoyed all this time with her aunt.

Ursula attended Edgartown Elementary and Martha’s Vineyard Regional High School, a graduate of the class of 1978. She was an excellent student. She had an extra dimension to her relationship with Principal Murph Shapiro of Edgartown Elementary because she babysat his children. In addition, he trusted Ursula to befriend and help new kids at the school as they found their places in a new community. This was a thankless job in those days of natives taunting newbies, requiring real independent spirit and steadfastness. Ursula exhibited these personal qualities regularly. Sometimes Ursula showed these qualities outside the school context, and in those cases, the family referred to them as extreme stubbornness or cussedness. Context is all!

Just as Barbara tagged along behind Chris, and Mary tagged along behind Barbara, Ursula tagged along behind all her sisters (and their friends) into horseback riding. Ursula was gifted at riding. Perhaps she benefited by the collective wisdom of her sisters and friends. Truth be told, Ursula brought fearlessness to her riding, a quality which cannot be taught. Her initial experiences with Augusta, an Island-renowned, rambunctious white Shetland pony, probably led to Ursula’s masterful control in her riding. Ursula continued her involvement with horses alongside sister Barbara over many years. She continued riding into her college years. Horses were a big part of Ursula’s life.

In point of fact, Ursula had nearly as much affinity with animals as Barbara, the longtime Edgartown animal control officer. As many longtime residents know, Ursula often accompanied Barbara on after-hours calls. Likewise, Barbara’s frequent visits to people’s homes situated her to be an erstwhile junior building inspector, relating her experiences with various families. They complemented each other in their work. In addition, Ursula and Barbara adopted many cats and dogs who were unwanted, and even rescued from abusive or neglectful owners. They rehabbed all these animals into long and healthy lives.

Ursula had more formal education than any of her siblings, a fact which may surprise many folks. Her B.A. from Clark University in Worcester, was earned in their world-renowned geography department. She went on to two master’s degree programs, first at University of Illinois, Champain-Urbana, followed by Eastern Illinois University at Charleston. These degree programs involved vernacular architecture and historical administration, respectively. She had great stories about U of I’s mascot, Chief Illini before he became defunct! Ursula used some aspects of her education when she served Edgartown on the Historic District commission for a few years.

Though Ursula was never the knitter that Barbara and Mary became, she literally pioneered our extended family’s way into quilting. Her interest was piqued when she studied American folk arts. As many are aware, patchwork and quilting are extremely addictive hobbies involving many skills and creative input. The fabric collections and quilts that grew from Ursula’s influence overtook aunts and cousins, as well as sisters. Ursula branched even further into the specialized art of hand-dyeing fabrics. Many of our projects have since included Ursula’s hand-dyes, enhancing their beauty significantly.

Finally, Ursula loved to read. Like her mom Maurita and nephew Andy, she read very fast. She was quite knowledgeable about the genres of science fiction, fantasy, and murders/thrillers. Her reading tastes included cookbooks, as she loved to cook. Her expertise in making jams and jellies of local fruits was well-known. Her beach plum jelly was delicious, so even though our father Richard often joked she’d been born in the wrong century, he was happy to eat her food made the old-fashioned way.

Ursula is survived by her sister Mary Dombrowski and brother-in-law Tom Dombrowski of Allentown, Pa.; her aunt Catherine Enos of Edgartown; five nephews and one niece; and numerous cousins. She was predeceased by her parents, Richard and Maurita Prada of Edgartown; her brother Vincent of Bethesda, Md.; her sister Christine Eissenstat of Frederick, Md.; and her sister Barbara of Edgartown. A memorial is planned for a later date, likely mid-September.

In lieu of flowers, donations in Ursula’s memory may be sent to the Massachusetts Society for the Prevention of Cruelty to Animals (MSPCA) Angell, 350 South Huntington Ave., Boston, MA 02130. Online gifts can be made to the same fund at justgiving.com/fundraising/barbara-prada. Such donations will add to the fund created for sister Barbara. Because they both loved animals and understood the needs of unwanted and injured pets very well, this charity is one they both favored very much.